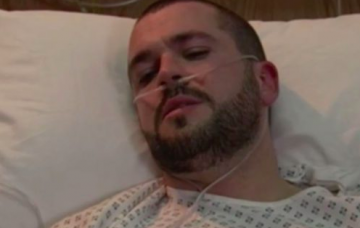 Corrie’s Aidan planned to take his own life MONTHS ago

Did you spot this scene?

Corrie’s Aidan Connor has been struggling with his mental health for some time, and the soap’s producer Kate Oates has now revealed that he originally contemplated suicide months ago.

He had even gone as far as to write and send a letter to his dad, Johnny – but he changed his mind at the time to help his sister, Carla.

“There was an episode some time ago when Carla said to Aidan and Kate that she wasn’t very well – she needed a kidney transplant and they were her best chance at a match,” Kate told Metro.co.uk.

“The next day, Aidan went and intercepted a letter at Johnny’s house. As writers and storytellers, we’d got ourselves to a point where Aidan was planning on doing it that night, but he decided to hang on for Carla.

“It didn’t mean he was better or sorted, but he just decided to hang on to help her.”

As Corrie fans now know, Aidan will take his own life next week, which his devastated father Johnny will discover on Wednesday.

Shayne, who has crafted Aidan into one of the Street’s most popular characters over the past three years, said of the plot: “I am honoured to have been trusted with a storyline like this, it shows the confidence that Kate and the team had in me to be able to play it.

“When you get given a storyline like this it is a decision that is not taken lightly, I have played it with as much honesty and truth as I could.

“I am very proud of what I have done in my three years on the show and on this storyline in particular.

“Talking could have helped Aidan to turn his life around. It could have brought him relief from what he was going through.

“This is what his loved ones would have wanted. Suicide is a very permanent response to what are usually temporary problems.

“Aidan is an ‘everyman’ figure, he is someone men can identify with, which is important in telling this story.

“We hope that anyone who recognises something of themselves in Aidan, will realise they can, and really should, talk about how they’re feeling.

“We all know someone who has maybe felt like Aidan did, someone who found it hard to talk and we have all heard stories like Aidan’s when it was too late, when people looked back and wished they had spotted the signs, but it isn’t always possible.

“If we can encourage someone who is feeling low, who is having the sort of thoughts Aidan was having, to realise they need to talk, then we have achieved what we set out to with this story.”