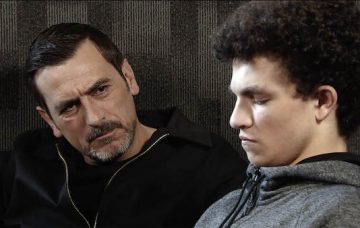 After a rough few months, it could get worse for Peter Barlow in 2019

The future of Coronation Street’s Peter Barlow and son Simon will be left up in the air in a dramatic start to 2019 in soapworld.

According to newspaper reports, factory owner Peter’s life will be in danger due to a heroic attempt to save delinquent Si from a blazing canal boat fire.

Explosive scenes set to air next spring will show Simon (played by Alex Bain) trapped below deck as flames spread through the craft.

And it will be down to his dad – played by Chris Gascoyne – to save the day and rescue the troubled teen after Si passes out due to the fumes.

An unnamed show source is reported to have told The Sun: “Someone raises the alarm and Peter races to rescue his son who has passed out from smoke inhalation.

“He will jump on to the burning boat and go below deck to try to get to Simon.

“He will manage to rescue him by throwing his lifeless body over the side and into the arms of neighbours, gathered on the side of the canal.”

But will Peter escape unscathed from the flames himself?

Read more: Coronation Street’s Alan Halsall reveals if he is leaving the soap

It is believed new show boss Iain MacLeod is not looking to purge characters from the cobbles – but has not promised to save any favourites from the axe, either.

“I’ve not got a hit list but if the story requires an exit, it will be story reasons only,” he is reported to have said by The Sun.

The Barlows and their extended family members have endured a particularly rough time of it in recent weeks, with Tracy’s wedding to Steve falling apart after she discovered he had been playing away again with Leanne and pregnant Sinead discovering she has cervical cancer.

And Peter has also had a topsy-turvy few months following his split from Toyah after finding out he wasn’t the dad of baby Susie.

His troubles continued as the bullying Si was suffering from spun out of control and saw Peter blasted with a paintball gun in a terrifying drive by incident in which viewers initially thought he had been gunned down with an authentic weapon.

He’s also tried to protect Si from the increasingly unpleasant intimidation of the gang terrorising him by employing one of the thug’s mums, Vicky, in the factory. And it has turned out she is no less disruptive than her son, Tyler.

But could either Peter or Si be sunk for good by this upcoming catastrophe on the canal?