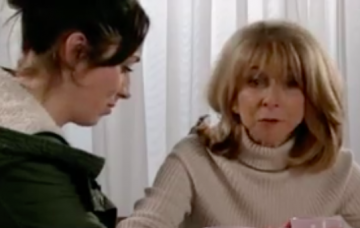 When Shona Ramsey turned to Gail Platt for some wise words after a nasty fall out with boyfriend David, she probably wasn’t expecting her future mother-in-law to drop the ‘T’ bomb on her.

But that’s exactly what happened last night (Wednesday 27 February) and fans fell in love with her for it!

After a huge row with David over Shona’s killer son Clayton, David ordered Shona to pack her bags and leave.

Discovering that she’s been helping him while he served his jail sentence for killing David’s wife Kylie, David understandably unleashed his rage at her.

With Clayton on the loose after escaping police custody, it’s no wonder emotions are running high.

During sweet scenes later in the episode, Gail and Shona had a heart to heart about being “mams” and Gail shared some wisdoms with the younger woman.

She said: “Look I’m not excusing some of your choices, but I do understand. As a mam. Heaven knows I’ve made some dreadful decision when it comes to my kids.”

Telling Shona to “fight” and promising “to back her up”, Shona replied by saying: “David won’t like you taking sides.”

To which Gail responded by leaning in closer, and saying: “Tough [bleep].”

And viewers were totally behind Gail’s “potty mouthed” approach to the problem, with one even hailing her a “national treasure”.

A third simply called her a “potty mouth”, while one more said Gail’s swear word “made their night”.

“Gail Platt saying ‘tough [bleep]’ tonight on Corrie has made my entire week, what a woman, absolute national treasure,” said another.

Spoilers tell us that Shona faces a deadly showdown with her killer son next week, so we can only wonder what language Gail will use then!

Do you agree that Gail Platt is a national treasure? Leave us a comment on our Facebook page @EntertainmentDailyFix and let us know what you think!