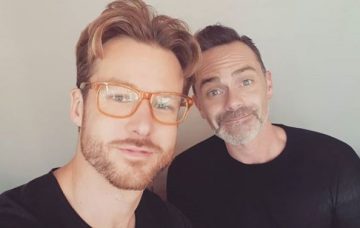 The couple have spoken to the new issue of OK! Magazine

The actor, who plays vicar Billy Mayhew in the ITV soap, told OK! Magazine the couple aren’t currently engaged but are looking to the future, which includes plans for a family.

He said: “We’d both like to have kids – I’ve always wanted them. I came out in 1995 and we couldn’t have adopted then, but things have changed to enable us to do that, if indeed we did want to adopt.”

Daniel added: “We’re not engaged, but if we’re going to bring up a family, I’d like to get married.”

The couple have been dating since last year, when they met at Stockholm Pride.

Stuart told OK! Magazine he is on the same page as Daniel when it comes to having children whether it’s biologically or through adoption.

“Most people like the idea of having a little version of themselves running around, so if we could look into it biologically, then great,” he said.

“But I’m also aware as a gay couple we can’t necessarily both do that and there are children out there who already want a family, so adoption makes sense too.”

Daniel and Stuart went public with their romance last year and frequently post sweet pictures of each other to social media.

They celebrated their one-year anniversary in August.

Daniel was previously in a relationship with Corrie co-star Rob Mallard, who plays Daniel Osbourne.

Do you enjoy watching Daniel in Corrie? Leave us a comment on our Facebook page @EntertainmentDailyFix and let us know what you think!