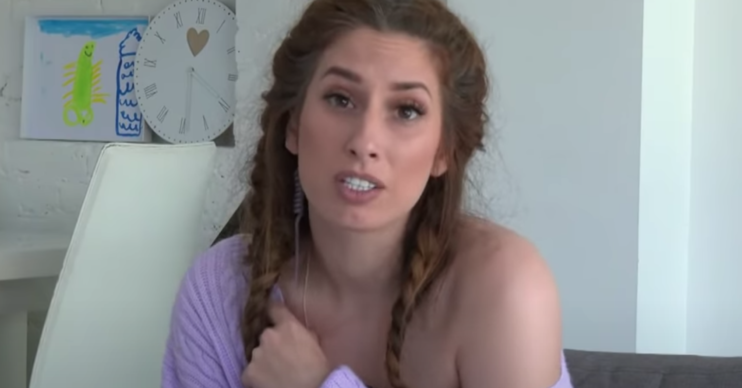 Self-isolation is taking a toll on the Loose Women star

Loose Women star Stacey Solomon has admitted to being left feeling low by self-isolation during the coronavirus pandemic.

The telly fave, 30, is living in lockdown with her fella Joe Swash, their baby Rex and her two elder sons Leighton and Zachary.

But even though her family – apart from Joe’s son Harry – are together, Stacey has been feeling overwhelmed.

Speaking to fans on social media, she admitted she has regularly been ‘on the brink of tears’.

Stacey said she feels tearful ‘all the time’ – and often for “no reason”.

She also said during an Instagram Stories broadcast that she had been upset after ‘running out of milk’ for Rex.

I just feel I’m on the brink of tears.

Nonetheless, the emotional star noted she felt “terrible” for feeling the way she does while others suffer due to coronavirus.

Stacey confessed: “I’m going to have to do something because I just feel I’m on the brink of tears. All the time.”

She then burst into nervous giggles before saying aloud: “I don’t know why I’m laughing.”

Stacey went on to blame her teariness on her body’s biological reactions.

“It’s got to be the hormones or the moon,” she joked.

“But do you ever have one of those days where you feel like you’re welling up all the time for no reason whatsoever?”

Stacey continued: “And then you feel terrible for feeling teary when there are so many people in the world in such awful circumstances I have no reason to be teary whatsoever.”

Thankfully, Stacey’s day did got better after 10-month-old Rex enjoyed polishing off some snacks with his mum.

She explained to fans: “He’s up and we are sitting watching TV stuffing our faces with crisps. Rex can’t believe his luck.”

Earlier this week, Stacey described giving Joe a makeover as the “best day ever”.

She followed up on Joe shaving off his beard by applying make up to the presenter’s face.

“I love you so much @realjoeswashy, this was so much fun,” she said.

“He even let me do lashes.”

Passing a verdict on her own efforts, Stacey concluded: “I love it, I’ve done such a good job.”