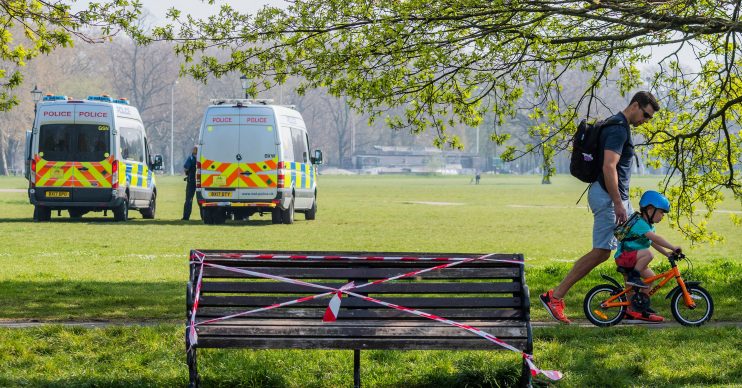 Brits have slammed a police officer who told a family to stop using their own garden amid the UK lockdown.

The incident is said to have taken place in South Yorkshire.

In a video that’s gone viral, a police officer is heard scolding a family on their doorstep.

Their young children were playing on the front lawn.

She told them: “You do not want your children getting the virus, it does not stop in front of your garden.”

The force later apologised for the encounter, calling  it “well-intentioned but ill-informed”.

“I am asking you to go inside”

The family’s father can be heard to say in the video: “You’re not allowed on your front gardens people.”

I’m going shopping in a minute, I’m going to Aldi.

She replied: “Sir, you can film me as much as you want. I am asking you to go inside. Are you refusing?”

“I’m going shopping in a minute, I’m going to Aldi,” he replied.

However, realising she could do no more, the officer headed back to the car and thanked the man for his time.

Police now banning people from their front gardens. In open defiance of what the law/guidance states.

We’re going to find out in the next few weeks that rolling back #policestateuk and restarting the economy isn’t going to be easy. https://t.co/sDB7NW8qtq

Brits were quick to react to the video, however, with the hashtag #policestateUK trending on Twitter.

Officers were also reportedly checking to ensure Brits were only purchasing essential items.

One Twitter user said: “Dear the public, please stop crying out for more police enforcement, they clearly don’t know what they are doing. Shopping being checked and kids ordered from their own front gardens, for instance! Has real crime disappeared?”

Another added: “I don’t mind being stopped as I’ll be out for the right reasons. However, inspecting my shopping or telling me I cannot sit in my garden is just a bit over the line.”

A third said: “Fight actual crime. Let’s see some cops on the beat, for instance, not harassing people shopping. Saw video of a police officer making small children cry, telling them they can’t play in their own garden!”

Disgrace – but absolutely predictable. Presumably not an affluent area they decided to ‘enforce’ in. I wonder how many kids in the gardens of middle class homes are being greeted by the police. No such thing as common sense – especially when a uniform is involved #PoliceStateUK

#PoliceStateUK Why are we not allowed in our gardens but people are allowed in allotments, got one next door to me and people are in and out all day every day ?????

Downing Street has, however, hit back at “heavy handed” police.

It came after Cambridge Police’s official Twitter account boasted that officers had visited a local superstore to snoop on shoppers and found aisles selling non-essentials were “empty”.

ED! previously told how police officers told corner shops they couldn’t sell Easter eggs as they are not “essential items”.

However, police have since been told: “If a shop is open then it will sell whatever it has in stock.”