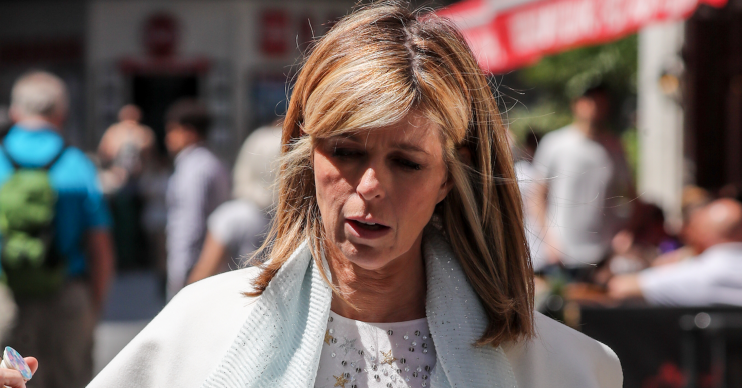 Derek is currently in the ICU

The 55-year-old posted a heartfelt message on Twitter after it was revealed Derek, 52, is in intensive care battling coronavirus.

Addressing the news, Piers wrote he was sending ‘love and prayers’ to the couple.

The former newspaper editor also indicated he had been aware of Derek’s condition before it was made public.

His tweet read: “Now it’s been made public, I can say this horrendous situation has brought the coronavirus crisis sharply into the hearts of all of us @GMB.

My love & prayers to Kate & Derek.

His message rapidly picked up thousands of Likes and retweets.

It is believed Kate is self-isolating with her two children Darcey and William while Derek is in hospital.

According to reports, she is also suffering with “mild” symptoms.

A source told The Sun that Derek has been in hospital since Monday (March 30).

His wife is said to be “sick with worry” about Derek, who is thought to be seriously ill.

“This is a desperate situation for Kate who is sick with worry about Derek’s health. He is intensive care battling coronavirus and she is beside herself,” a source said.

“Kate has symptoms herself too but they are mild so she is self-isolating at home with the kids.”

‘Everyone at GMB is so worried for Kate’

“She is obviously off TV too. Everyone at GMB is so worried for her,” the source concluded.

A spokesperson confirmed Derek is in intensive care.

A statement read: “Kate’s husband, Derek Draper, has been taken to hospital and is being treated in intensive care with a confirmed case of COVID-19.

“He was admitted on Monday and has since tested positive for the virus.

“Kate hasn’t been tested, however, she has also been displaying mild symptoms, also since Monday.”

Derek made appearances on TV last December with the couple’s children while Kate took part in I’m A Celebrity.

He is a former political lobbyist and has also worked as a psychotherapist.