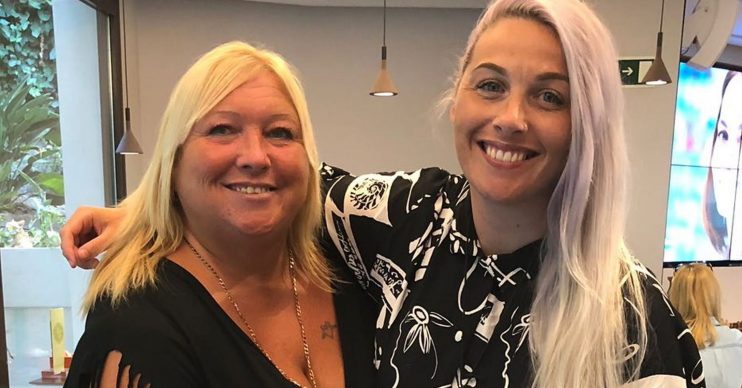 She's urging people to be sensible in the lockdown

A grieving daughter has described having to listen to her mum’s dying breaths over the phone as she passed away from coronavirus – while playing her Tina Turner’s Simply the Best.

Kay Elmer, 51, fell ill with a debilitating cough and it left her bedbound, suffering a fever and unable to eat.

Days later, Kay was fighting for her life in an intensive care unit. And because of the virus, daughter Sophia was unable to be with her mum.

The 30-year-old could only call her mother’s mobile phone, and this is how she heard her final breaths as doctors turned off the life support, on Thursday, March 26.

Kaye passed away alone, while Sophia played her favourite song down the phone.

Now, Sophia has slammed those who have flouted the lockdown rules. She hopes they will learn from her story as she and brother Jamie [Dollery], 33, come to terms with their loss.

Sophia, from Wirral, Merseyside, said: “Near the end, she was still saying ‘don’t worry, I’ll be fine’, but she was crying as she called to say ‘they’re putting me under’.

“The more people that ignore the guidance, the longer it’s going to be before I’m allowed to have a memorial for my mum.

I want to spread awareness and get people to stop being silly.

“The aim here is for people to understand that they can save lives. Unfortunately me and my family have had to pay for people’s mistakes of not staying indoors and regardless of what the law is saying, people need to use their common sense.

“I want to spread awareness and get people to stop being silly. This isn’t meant to be just one sympathy story about someone who’s lost their mother.”

She described her mum as “the life and soul of the party” and said Kay went on holiday to Cape Verde every month with her husband John, 67.

Kay had shown no symptoms until the week she was rushed to hospital.

Sophia, who works as a DJ, explained: “My mum had been well. Me and my girlfriend had seen her a few weeks before she got ill.

“Her last text said ‘I love you, always and forever. Be careful driving and get Jamie home’.

“They wouldn’t let us in because they didn’t know if it was the virus or not for a couple of days. I could only look at her through the window.”

She said what followed was five days of calls to see if there was a change in her mum’s condition. But on the last, doctors said she needed to go in and turn the life support off.

She continued: “Her heart was failing and her kidneys were showing signs of failure. She was on 95 per cent oxygen then, which is just too much.”

When she saw her mum’s face, Sophia said she couldn’t bear to watch her pass away. So instead, she went through to the waiting room and called her mobile.

She played Simply The Best, which is the same song that Kay chosen to say goodbye to her own mum, Sylvia.

She explained: “I went [to the window of her room] and I saw her. They turned her to face us and it was just too much. I fell to the floor crying.

“My brother walked me out to the waiting room and I asked the nurses to put mum’s phone on.

“I called her on her mobile. They answered and we played all our favourite songs to her until she took her last breath.”