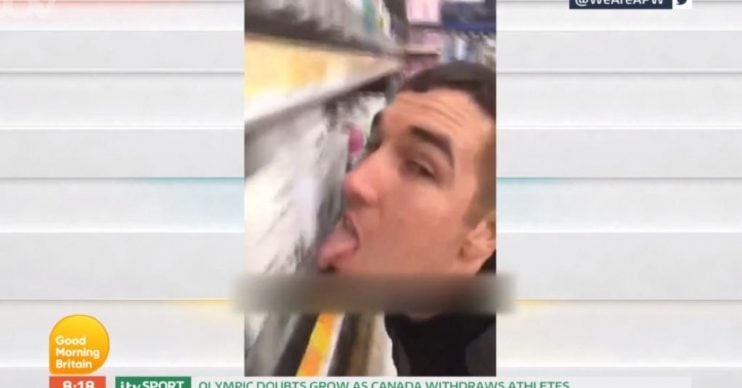 The clip featured on GMB earlier this week

A man has been arrested on terror charges after filming himself licking products in a supermarket and asking, “Who’s afraid of coronavirus?”

Cops in Warrenton, a town in the US state Virginia, arrested a man after a horrifying clip that allegedly featured him went viral.

The suspect, 26-year-old Cody Pfister, is charged with making a terrorist threat following the incident, which reportedly took place at a Walmart store.

The video was aired on Monday’s (March 25) episode of Good Morning Britain.

And host Piers Morgan, who was visibly disgusted, demanded that the culprit be locked up and denied medical treatment for “deliberately” trying to pass the virus on to other people.

He told viewers: “This is of somebody in America, who went to a supermarket knowing the coronavirus is attacking everyone in the United States, and he did this and posted it online.

“And then I would like him deprived of any healthcare should he then get the virus, having tried to deliberately give it to potentially lots of other people.”

Speaking further, Piers said such a punishment could help deter other “morons” thinking of doing something similar.

Now, police in Warrenton have confirmed they have taken a local man into custody.

The force said in a statement, in response to receiving reports from horrified people all over the world who had seen the clip: “We take these complaints very seriously and would like to thank all of those who reported the video so the issue could be addressed.”