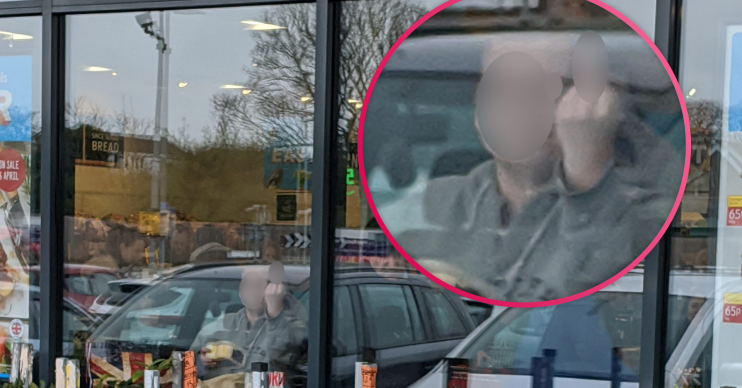 Customer Paul Sexton claims he was packing up his shopping at the shop in Walton-on-the-Naze, Essex on Wednesday last week (March 18) when a female shopper approached the till to speak to the cashier.

Paul, 48, said he repeatedly asked the woman to give both himself and the shop worker space as she was flouting the government’s ‘social distancing’ advice.

He alleges that she refused and instead ‘lunged’ at him to cough in his face.

And when he had left the shop, he claims she stuck up her middle finger at him through the window.

Project manager Paul, of Frinton-on-Sea in Essex, said: “I don’t usually shop in Aldi but I picked up a couple of small things as it’s a bit more local.

“The cashier was running my things through the scanner and I’m bagging them up.

‘Vile’ behaviour regardless of the pandemic

“This woman came and leant on the space directly in front of the cashier and tried speaking to him.

“I explained to her that I was being served and said, ‘Give me a bit of space – there’s no need to be this close’.

“It wasn’t a tit-for-tat verbal argument – she was just ignoring me and carried on talking to the guy.

“I then said, ‘No, you need to step back because you’re encroaching on my space and you’re right in front of the guy who’s trying to serve’.

“Then I got more firm with her and said, ‘Look, stay the [bleep] away’.

“She was around 5ft 4, lunged herself towards me – and coughed in my face.

“Afterwards [the cashier] said, ‘Why on earth did you just cough in his face?’.”

Paul said he was “shocked” be the incident.

“She not only didn’t consider my health, but also anyone I’m going to associate with,” he continued, adding: “I was shocked – I’m usually fairly calm and like to see myself as well educated and have been giving people space if they come towards me and moving to one side.

“She was not aggressive but used another kind of weapon to try and empower herself over me and get me to move – she’s a low level uneducated person.

“It’s vile in normal times to purposely cough or spit at someone like that – but to do it now.”

He went on to call for the shopper to be banned from returning to the Aldi store for life.

Despite what happened, Paul claims it was he who was escorted from the premises. He waited to speak to the manager and when he came out, he was apologetic.

A spokesperson for Aldi said: “The overwhelming majority of our customers have been very patient and understanding as we do our best to serve them at this time. However, we will not tolerate any threatening or violent behaviour. Anyone who is aggressive in any way to our colleagues will be asked to leave immediately.”