Coronation Street actress Georgia Taylor has said it's "inappropriate" to ask her for a photo when she is awaiting an appointment with her doctor.

The 38-year-old took to Twitter to ask her followers if she was being unreasonable after the person who asked for a selfie then accused Georgia of being "rude" for refusing. 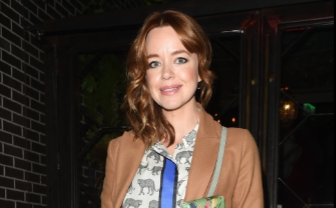 Georgia tweeted her anger after being told she was "rude" for refusing to do a selfie in a doctors' waiting room (Credit: FameFlynet)

Georgia, who plays Toyah Battersby in Corrie, wrote: "Since when was it deemed acceptable to ask for selfies in the doctors reception?

"You have no idea what I'm here for and it’s completely inappropriate, but apparently I'M the 'rude' one for saying no..."

Some people should stop and think how 'rude' they are.

The soap star's friends and fans were quick to say they agreed with her viewpoint.

Hundreds commented on her tweet including some fellow celebs.

Her co-star Kym Marsh simply wrote, "Oh good god!! X," while comedian Shappi Khorsandi trumped her by saying: "I once got asked at a funeral."

Her on-screen sister Jane Danson, who plays Leanne Battersby, tweeted to tell her not to worry about it. 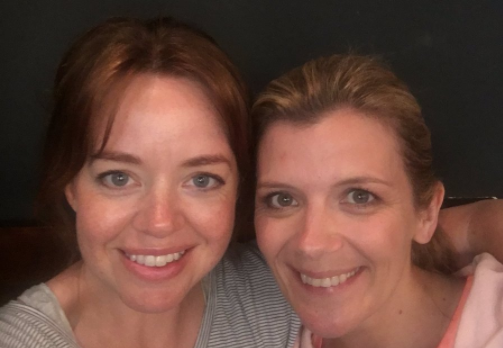 Some of Georgia's celeb friends including Jane Danson tweeted their support (Credit: Twitter)

She wrote: "You are quite possibly the kindest soul I know. Maybe some people should stop and think how 'rude' they are? I'll send Leanne round and that will show them rude."

Georgia replied: "Aw thanks sis. Love you. And love a bit of Battersby spirit."

The soap stars fans also rallied round to tweet their support and say she hadn't been at all rude.

One wrote: "Some people have no idea. You did right, most people (decent people) wouldn't have asked in the first place." 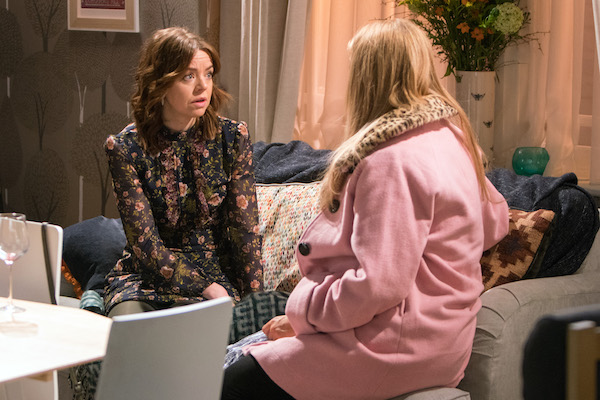 Georgia is a familiar face to many thanks to her role as Toyah on Corrie but does that give the right for her to be approached while at the doctors? (Credit: ITV)

Another told her: "You're allowed a private life some people cross the line."

"No way how disrespectful and rude of them, how dare they call you rude for saying no!" a third wrote, adding, "some people just have no consideration of others. I hope you're ok lovely." 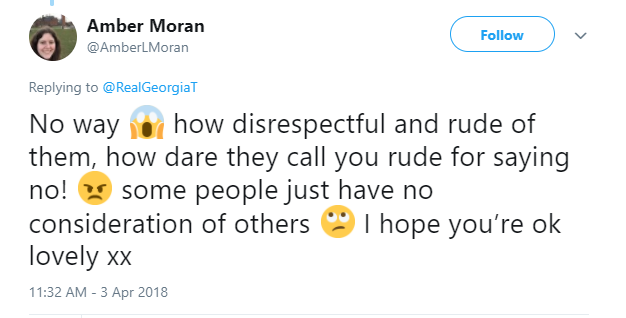 Wigan-born Georgia has starred on Coronation Street from 1997-2003.

During her time away from Weatherfield, she appeared in TV shows and films including Casualty, Law and Order: UK and The Bank Job, before returning to play Toyah again in 2016.

Do you think it's rude to ask celebrities for a selfie at the doctors? Leave us a comment on our Facebook page @EntertainmentDailyFix and let us know what you think!