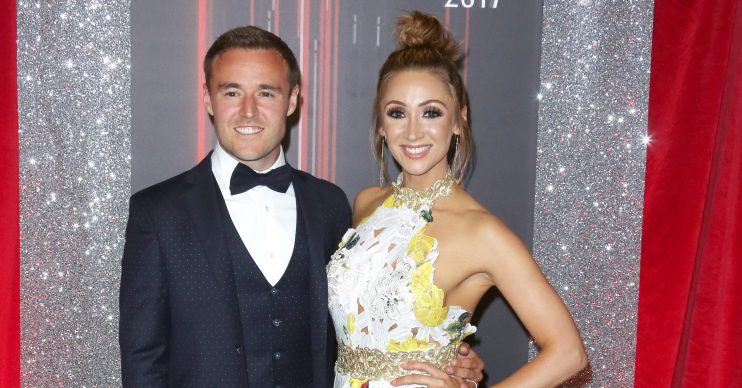 The pair share a daughter, Sienna, six, together but apparently co-parent without talking to one another.

A report in The Sun Online claims that they purely communicate by text messages and a source addressed the rumours that Lucy-Jo had begun dating her new partner, Lewis Devine, prior to her officially splitting with Alan.

The source claimed: “The rumours that Lucy and Lewis were close before she split from Alan were going around at the time but Alan always played a straight bat and said nothing.

“The reality is that him and Lucy barely speak these days and only interact via text.”

The couple announced their split in 2016, only to re-couple briefly and then announce they were divorcing in 2018.

Lucy-Jo soon announced she was dating actor Lewis, who she met while working with him on the pantomime Snow White and the Seven Dwarfs the previous year.

They have gone on to welcome their first child together, a baby boy, just this month.

Tensions seem to have grown between Alan and Lewis, after the Corrie star took offence to him describing his daughter as his own to his some 6,000 followers.

Sharing news of his newborn, Lewis’s Instagram tribute included: “Our Sienna is delighted and is already making the best big sister, just like I knew she would!”

Read more: Paddy McGuinness on how he turned down a major soap role

Alan clearly was none too happy at this reference, and took to his own Instagram to seemingly slam Lucy-Jo’s new man.

He shared a story to his some 184,000 Instagram followers that stated: “You’re welcome to keep the lying cheating one & call her your own! But not my daughter.”

And while it remains unclear who is the “lying cheating one” he is definitely warning Lewis to not mistake Sienna for his own child.

Meanwhile Alan has moved on himself, and is in a relationship with former Coronation Street actress Tisha Merry.

They recently moved in together, with Tisha moving into his luxury home that is worth an estimated £750,000.

The couple have also holidayed together and taken young Sienna with them.

ED! has reached out to Alan and Lucy-Jo’s representatives for comment.