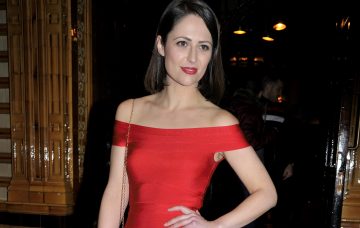 It was while she working on a documentary

Nicola Thorp was harassed by a director while working on a documentary about women’s rights.

The Coronation Street actress – whose role as a presenter in the film never materialised – has candidly opened up about her experiences over the years, and she admitted it “really messed [her] up for a while”.

She told the Mirror: “A man in the public eye approached me to do a documentary about women’s rights and then, in the process, he told me how much he wanted to have sex with me.

“He then started sending me photos of dresses and shoes he thought I’d look sexy in at three in the morning.

“That really messed me up for a while. It made me think, ‘well, did I encourage him? Was my worth as a potential presenter of a documentary only gauged by how much I flirted with him?’ ”

The soap star – who was also once locked in a work bathroom when she was 19 until she agreed to kiss her manager – has spoken out and said society needs to “definitely” do more to support women who have been harassed.

Nicola, now 30, added that while the #MeToo movement has changed a lot, there’s still more to be done as it’s focused on punishing men rather than supporting women.

She recently made a brief return to the cobbles, having departed last year.

Her character Nicola Rubenstein visited with her son, Zack, and ruffled Gary Windass’s feathers when he revealed he didn’t have the cash to pay the maintenance she was due.

Nicola left Corrie after a string of huge storylines, including being shot while pregnant by her murderous dad Pat Phelan.

Have you ever been harassed in the workplace? Leave us a comment on our Facebook page @EntertainmentDailyFix and let us know what you think.