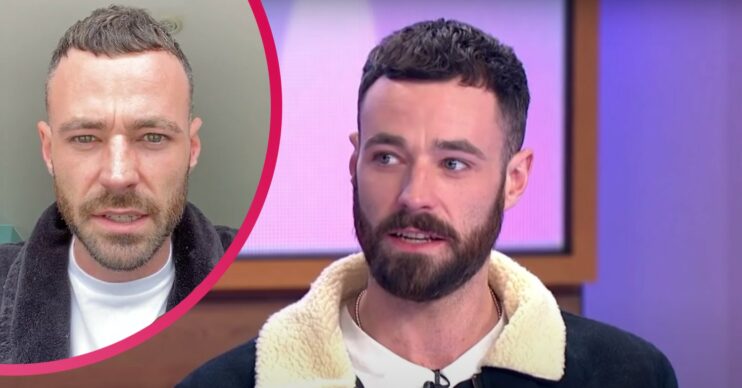 The actor previously played Callum on the cobbles

Coronation Street star Sean Ward has been pictured in handcuffs – with the actor led away by police at an anti-vax gathering.

The 33-year-old was photographed between two officers at the rally in Canary Wharf, east London, yesterday (September 3).

Press reports indicate the Metropolitan Police have said they do not comment on individual arrests. It is unknown why Sean was led away by officers.

Dressed in black trousers and a white T-shirt, Sean had his mouth open as he looked downwards.

He later added: “The police have fully blocked the doors and won’t let anyone in, as you can imagine, but we’ve already got people in there.”

A few weeks ago he indicated on social media he had joined a demonstration at the studios where the BBC and ITV filmed.

Police said a number of officers attended a demonstration at Cabot Square in Canary Wharf, guarding the entrance to the building.

They confirmed: “A number of protesters have become violent towards police.

We’ve already got people in there.

“Four of our officers have been injured during clashes. This is unacceptable.”

Where else have you seen Sean Ward the actor?

Sean, who played Callum Logan in the ITV soap, was also part of the cast of BBC One’s Our Girl.

He has also amassed credits for Doctors, Casualty and The Royal.

Sean starred on Weatherfield’s cobbles in 2014 and 2015, with his drug dealer character terrorising the Platt family.

However, Kylie killed Callum after he brutally attacked Sarah. His body ended up buried underneath the garage of No.8.