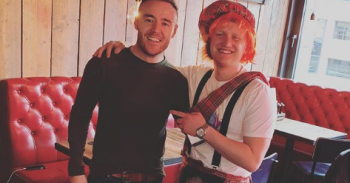 Soap stars Alan Halsall, Colson Smith and Andrew Whyment have given fans a peek at the antics going down on castmate Sam Aston’s stag do.

Chesney Brown star Sam, 25, and his co-stars have been in Edinburgh for some hijinks ahead of the actor’s wedding to yoga teacher Briony Gardner later this year.

The couple are thought to have been an item for seven years.

In keeping with stag do tradition, Sam’s mates did not miss out on any opportunity to get him dressed up – and Alan showed off the costume Sam got lumbered with for last night’s celebrations in Scotland on his Instagram account.

“This is the moment @samaston93 wishes he never invited me on his stag 😂😂 #McChesney,” he captioned the image, adapting Sam’s Corrie character’s name.

Alan, 36, also uploaded pics of a tray of beers placed in front of a smiling Sam and Edinburgh Castle to his Insta Stories, as well as cheeky shot of Sam standing in front of darts board bearing the message: “I hate yoga.”

Andrew Whyment, 37, also popped up in a snap of Alan’s showing some of the group messing around in a ball pit.

Earlier today the Kirk Sutherland star seemed in fine form as he locked arms with Chesney – who also looked to be in good shape the morning after the night before – for a pic shared on Twitter.

And Colson Smith, who plays Craig Tinker, also demonstrated he was in town for the party as he shared a snap of Arthur’s Seat in his Stories, as well as an image of him in a nightclub surrounded by drinks.

What else could happen to Sam before the weekend is all said and done?