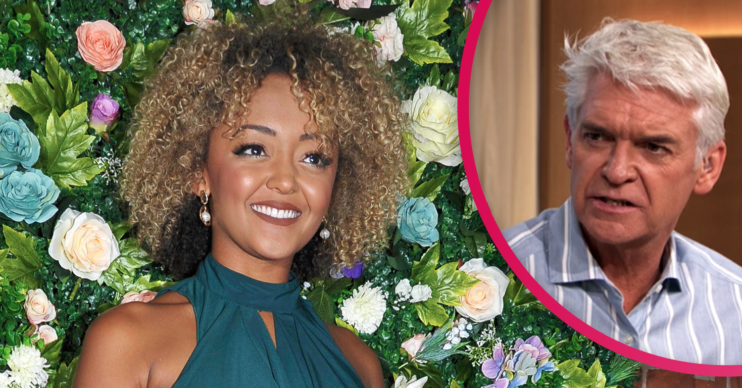 She was meant to do it!

Coronation Street star Alexandra Mardell has addressed the walking into a wall ‘blunder’ which was pointed out by Phillip Schofield.

During yesterday’s episode of This Morning (Tuesday, June 16) Phillip and Holly sat down to talk to Sharon Marshall about the soaps.

On-screen a clip was shown of the soap stars returning to work at Corrie. During the clip, character Emma Brooker, played by Alexandra, could be seen walking into the short wall outside of Audrey’s salon.

After the clip was played, Phillip said: “Somebody looked like they walked into the wall there.”

However as there was no sound playing on the clip, it would have been hard to tell if Alexandra was meant to do that or if it was an accident.

Later on, he pulled up the clip on Twitter and zoomed in on Emma. Again, there was no sound so it was hard to tell if it was a blunder or not.

As the clip was shown Holly said: “Oh yeah, well spotted you.”

However on Instagram stories, Alexandra has addressed walking into the wall and confirmed it was a part of the script.

She wrote: “Thanks for the kind messages, but I didn’t really hurt myself at work.”

The actress also added: “Looks like drama school paid off!” Adding little pictures of the Oscar awards and tagging Phillip.

A similar clip was posted on Coronation Street’s YouTube Channel with sound.

Read More: Samia Longchambon posts snap of first day back at Coronation Street as she does her own hair and make-up

During a rehearsal take, ‘Emma’ walks into the wall and she can be heard saying “Ow!”

Sally, who has walked past turns around and says to her: “Oh Emma that must have hurt.”

It then cuts showing the same scene, however this time the cast are no longer wearing their ITV coats.

Did you spot Emma walking into the wall? Leave us a comment on our Facebook page @EntertainmentDailyFix and let us know what you think!