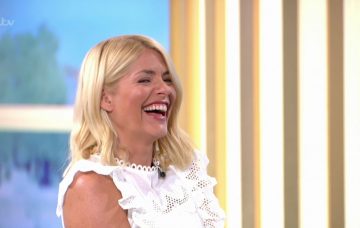 Shortly after his return to the Coronation Street cobbles, actor Nigel Havers is set to step into yet another TV role – co-host of This Morning.

The Mirror has reported that Nigel will be stepping in as one of the summer’s guest hosts, while regular hosts Holly Willoughby and Phillip Schofield are on holiday.

The offer reportedly came after Nigel appeared as a guest on the show – in a particularly flirty interview with Holly.

Nigel joked with Holly, touching her knee and asking her out to lunch, during the interview.

The Mirror’s source claims his appearance went down well with viewers, and makes him the ideal choice for a fill-in host.

“He is the perfect choice to cover our regular hosts,” the source said. “He is suave, dapper and a favourite of our viewers thanks to his previous, cheeky sofa appearances.”

Nigel is set to present the show on Monday, alongside Lisa Snowdon, before fan favourites Rylan Clark-Neal takes over on Tuesday.

Rylan will present with Lisa on Tuesday and with Gok Wan for the rest of the week.

Holly and Phillip are usually replaced by Eamonn Holmes and Ruth Langsford while they take some time off, but this week they’re away for a wedding – so back ups are being called in for the back ups.

“Viewers appear to be enjoying these surprise guest hosts across the summer,” The Mirror’s source said.

Nigel recently returned to Coronation Street, after leaving the show for a second time in February 2013.

Entertainment Daily has contacted representatives for Nigel for this story.