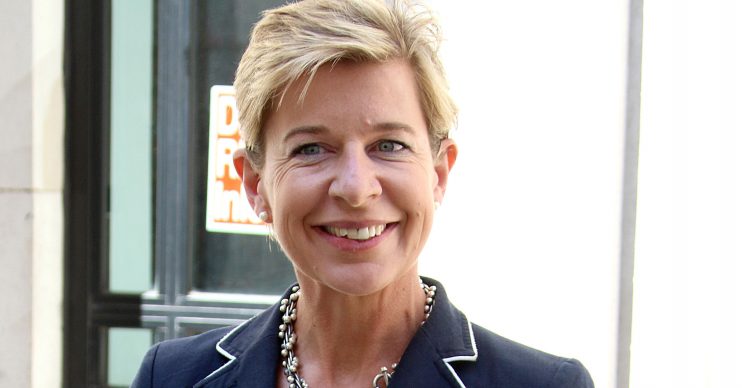 And we have new mum Rachel Riley to thank!

Katie is said to have violated the site’s hateful conduct policy and, as a result, she is temporarily locked out of her account.

The only tweet still visible on Katie’s account today (Thursday January 30) is from a critic accusing her of inciting racial hatred with messages directed at the rapper Stormzy.

The policy bans individuals who are seen to be promoting violence or inciting harm based on race, religion, national origin or gender identity.

The news came after Countdown star and new mum Rachel Riley met with Twitter representatives and asked them to review and remove Katie’s account.

Thank you @Twitter re the mass deletion of Katie Hopkins’ offensive tweets. Faith in humanity and social media restored.

Rachel – who welcomed daughter Maven in December – said she was “pleased to see that action appears to have been taken”.

Katie has more than a million followers on Twitter and often hits the headlines with her controversial posts.

Katie’s critics reacted to the news with glee, with many saying it was about time Twitter took action against the star.

One said that “faith in humanity” had been restored.

Thank you @Twitter re the mass deletion of Katie Hopkins’ offensive tweets. Faith in humanity and social media restored 🙂

Doing a little dance and downing a glass of fizz in celebration of @KTHopkins tweets being mass deleted. Thank you @Twitter About time!

She uses her Twitter platform to incite racial hatred and division.

However, others bemoaned the lack of free speech and said Twitter would be a dull place without Katie.

Twitter will be very dull now that Katie Hopkins has been suspended by a few very politically correct people. Free speech no longer allowed in this country. A sad day!

@RachelRileyRR We live in a free democratic country wether you agree or not with someone’s views don’t mean you should silence them. #Facist #KatieHopkins

Last year, it was claimed that one of Katie’s tweets drove Little Mix singer Jesy Nelson to attempt to take her own life.