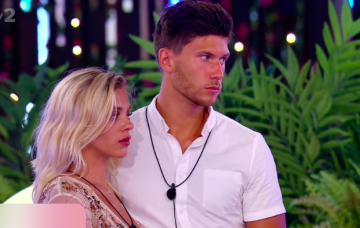 This gym picture sure is suspicious...

These two had instant chemistry from the moment she arrived in the villa, but is all as it seems?

Fans are questioning the very universe around us after finding a photo online that suggests Jack Fowler already knew his new romantic interest, Laura Crane – long before Love Island.

The image shows what looks like Jack, 22, and surfer Laura, exercising side-by-side.

Beside the picture, one fan wrote: “The tea is that black jack and new laura knew each other prior to coming in the villa ☕☕☕ #LoveIsland”.

A third added: “Love island is a joke. Laura and jack don’t know each other do they 🤔🤔🤔🤔 #loveisland”.

Jack, 22, and Laura, 23, officially become a couple on Friday, after he binned off Other Laura, and she gave Dr Alex the swerve.

It’s not the first time the show has come under fire for featuring couples who already knew each other.

Back in 2015, Hannah Elizabeth and Jon Clark were forced to insist they were genuine after it was revealed they knew each other before the show and shared a management company.

And this series has been particularly under fire for ‘fixing’.

First, everyone thought Rosie Williams and Adam Collard must know each other because they both posted a picture of similar bags before entering the villa.

Then it was pointed out that make-up artists Kazimir Crossley and Alexandra Cane worked together on a shoot long before appearing on the ITV2 reality show.

Alexandra was also rumoured to know Megan Barton-Hanson after they were pictured on a music video shoot together.

But bad news, reality conspiracy theorists, because ITV have confirmed to Mirror Online that it’s not actually Laura in the photo – just a look-alike.

The couple revealed how they returned to the Love Island villa where Nathan popped the question.

Fix or no fix, we love all this romance.

What’s been your favourite Love Island conspiracy theory? Leave us a comment on our Facebook page @EntertainmentDailyFix and let us know what you think.