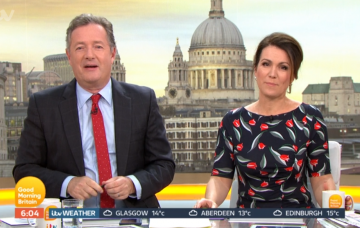 The presenter made the confession on GMB

During the interview, Piers said that his eldest son Spencer, who is a huge Love Island fan, hangs out with Charlie.

Read more: Piers Morgan gets “mugged off” after trying to making fun of Love Island star

He told Charlie: “I know you go socialising with my eldest son Spencer, who to my horror, loves Love Island.

“He vouches for you and says you’re a relatively normal bloke, so what are you doing in there?”

Charlie replied: “Just having a bit of fun. Fun in the sun.”

Piers then asked Charlie whether his “sole ambition” was to have sex with one of the islanders in the villa.

Londoner Charlie said: “No. My sole ambition is to have a good time and potentially find someone.”

Meanwhile during their chat, Piers was left red-faced after trying to poke fun at Hayley by quizzing her on maths.

The presenter was trying to prove his belief that the contestants on the show aren’t intellectual.

He decided to quiz Hayley on her general knowledge and asked her whether she knows “Pythagoras’ theorem to the nearest five decimal places”.

But Susanna was quick to turn the tables on Piers and asked: “Well, do you?”

Piers replied: “I do actually, it’s 3.147. They’re certainly the first four digits,” before members of the production team appeared to shout from behind the camera.

But Piers had got Pythagoras’ theorem mixed up with Pi and immediately spotted his mistake.

Piers then threw his hands in the air and shouted: “No, that’s Pi!

“Dammit. That’s Pi not the Pythagorus’ theorem, but you knew that didn’t you Hayley.”

Are you surprised by Piers’ link to Charlie? Leave us a comment on our Facebook page @EntertainmentDailyFix and let us know what you think!