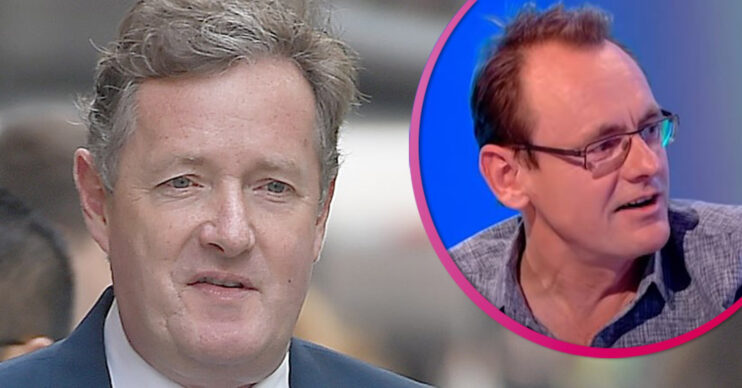 The death of comedian Sean Lock has left celebrities and fans devastated as tributes were paid on Twitter.

However, former Good Morning Britain host Piers Morgan has come under fire for his tribute to Sean, who died aged 58 after battling cancer.

Piers shared a photo of Sean to his Instagram and Twitter alongside a quote the 8 Out of 10 Cats star once said about him.

‘If I could have my ashes spread anywhere I wanted, I’d have them spread in Piers Morgan’s eyes.’
RIP Sean Lock. pic.twitter.com/tkAswfn6OQ

What did Piers say about comedian Sean Lock?

Piers’ post read: “‘If I could have my ashes spread anywhere I wanted, I’d have them spread in Piers Morgan’s eyes.’ RIP Sean Lock.”

Read more: Comedian and 8 Out of 10 Cats star Sean Lock has died at the age of 58

However, some of his followers weren’t happy with the message.

One person commented: “And in true Piers Morgan fashion you’ve managed to make this one about you. RIP Sean Lock – a pillar of British comedy.”

Another wrote: “Don’t make it about you.”

One said: “As always you have to be the focus, not the poor man who has lost his life.”

Others paid tribute to Sean as one added: “He was so funny! Rip Sean.”

Another said: “RIP Sean Lock, a comedian who will be missed.”

One person defended Piers’ post as they wrote: “I’m not sure he has made this about him by quoting Sean speaking about him.

“It’s obviously something he remembers about him, and is derogatory to him, if anything, it’s humorous and makes us think of just how hilarious Sean could be.”

Another said on Twitter: “People saying it’s weird of Piers to tweet this or making it about him, he’s actually highlighting Sean’s great humour and the great comedian he was.”

Meanwhile, Sean’s agent confirmed he had died after battling cancer.

A statement from his agent Off The Kerb Productions said: “It is with great sadness that we have to announce the death of Sean Lock.

Read more: Who is Sean Lock’s wife Anoushka Nara Giltsoff and does he have children?

“He died at home from cancer, surrounded by his family.”

In addition, they said: “Sean was also a cherished husband and father to three children. Sean will be sorely missed by all that knew him.”