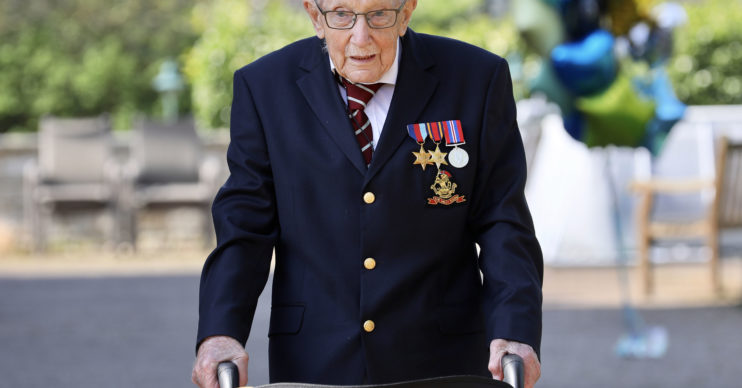 Colonel Tom Moore is reportedly in the running to star in the famous John Lewis Christmas advert this year, after inspiring the country with his fundraising efforts.

The war veteran famously raised over £32 million for the NHS after pledging to walk 100 laps of his garden before his 100th birthday.

He completed the challenge before his milestone birthday on April 30.

He then landed a number one single, You’ll Never Walk Alone, with Michael Ball, and was presented with a Pride of Britain award.

Man of the moment

Advertising company Adam&EverywhereDBB, who are working with John Lewis this year, have reportedly pitched all of their ideas around the war veteran.

“Tom’s fundraising touched the nation and going forward he will remain a figurehead of what was good during the pandemic,” a source told The Sun.

“For many Tom became totally unifying and those working on the campaign for John Lewis’ next advert want to join in that celebration.

“The coming together of the nation during this unprecedented crisis is one of the theme’s being explored and of course Tom is at the heart of that.”

The source went on to reveal that the campaign is still in the planning stages.

But they believe that Colonel Tom is going to be ‘man of the moment’ for a long time to come.

John Lewis Christmas adverts have become an iconic part of the festive season.

In 2018, Elton John starred in the advert, while last year excitable Edgar the dragon melted the nation’s hearts.

A knighthood for Tom

Colonel Tom’s John Lewis news comes after he received a knighthood from the Queen, making him Sir Tom Moore.

The war veteran shared a statement on his Twitter account, thanking the Queen, Prime Minister and the British public for the honour.

He wrote: “I am absolutely overwhelmed.

“Never for one moment could I have imagined I would be awarded with such a great honour.

1/2 A message from Tom; ‘I am absolutely overwhelmed. Never for one moment could I have imagined I would be awarded with such a great honour. I’d like to thank Her Majesty The Queen, the Prime Minister and the Great British public. I will remain at your service…

“I’d like to thank Her Majesty The Queen, the Prime Minister and the Great British public. I will remain at your service…”

The statement continued: “This started as something small. And I’ve been overwhelmed by the gratitude and love from the British public and beyond.

“We must take this opportunity to recognise our frontline heroes of the National Health Service. [They] put their lives at risk every day to keep us safe.”