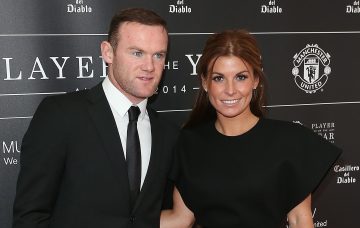 They're adjusting to life in America

Coleen Rooney has shared the sweetest picture of herself, husband Wayne and their four sons.

The star took to Instagram on Sunday to share a snap of the family enjoying a cuddle together on the sofa.

In the photo, Coleen is seen snuggling into the couple’s three youngest boys – Klay, five, Kit, two, and eight-month-old Cass – while their eldest son Kai, eight, is seen cuddling up beside them and dad Wayne.

Coleen, 32, simply captioned the post: “Everything,” followed by a blue love heart emoji.

One person said: “Adorable boys,” while another wrote: “Beautiful picture of you your family.”

A third added: “They all look so similar but each different! Beautiful family!”

The family have been adjusting to life in Washington D.C. after relocating to the states during the summer.

They moved across the pond after footballer Wayne, 32, signed a contract with Washington’s D.C. United earlier this year.

In July, Coleen confirmed that she and her four children would be moving to the states to be with Wayne.

Coleen told Reveal magazine the family will stay in D.C. for the duration of Wayne’s contract before returning home to the UK.

In August, Coleen admitted she was worried about how her son Klay would cope with the move.

In an interview with The Mirror, Coleen said: “My eldest (Kai) is so outgoing he is fine – you put him anywhere and he will get on with it.”

Coleen said Klay “loves home and being comforted” and he was worried about what his friends would do without him.

Read more: Coleen Rooney’s sons bring a touch of home to new life in the US

Coleen added: “But my five year old loves home and being comforted. He said, ‘What are my friends going to do without me?’.

“But they are young enough to adapt to it – and there are so many school holidays anyway.”

Would you ever relocate somewhere else? Leave us a comment on our Facebook page @EntertainmentDailyFix and tell us about your experience!