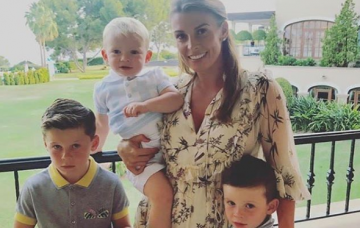 TWO BFGs and a Peter Pan!

Coleen Rooney has got into the spirit of World Book Day by getting three of her four sons dressed up as their favourite characters.

The 31-year-old WAG shared a picture with her Twitter followers of Kai, eight, Klay, four, and Kit, two, looking adorable in their costumes.

Kit wore a green suit and matching hat as he dressed up as Peter Pan from J M Barrie’s classic children’s novel.

Meanwhile Kai and Klay both have the same favourite character – or perhaps Klay wanted to be just like his big brother!

They donned big ears, green trousers and a brown waistcoat to transform into Roald Dahl’s BFG.

Read more: Victoria Beckham shares rare pics of her children as she calls herself a “terrible mother”

Within a few hours, 1.8k people had liked the snap, with some of Coleen’s fans rushing to tell her how cute they thought it was.

“Aww babes they’re sooo cute! Hope they have a fab day,” one wrote.

“They look so adorable,” wrote another.

“They look brilliant,” said a third.

Coleen wasn’t the only celeb whose children were celebrating World Book Day.

Amanda Holden shared a picture of her daughter Hollie dressed up as Mildred Hubble from The Worst Witch.

“My little #HRH as #mildredhubble in the #snow #worstwitch #worldbookday”, the Britain’s Got Talent judge wrote alongside the snap.

Singer Michelle Heaton said she “didn’t care” that her children, Faith and Aaron, has chosen “less traditional” costumes as they dressed up as Belle from Beauty And The Beast and Captain America from the Marvel comics.

Loose Women’s Saira Khan was particularly proud of her son Zac for dressing up as The Boy In The Dress from the David Walliams’ book of the same name.

She wrote alongside his picture on Instagram: “World Book Day!! I persuaded Zac to go as ‘The Boy in the Dress’ – he goes to an all Boys school so I’m really proud he gave it ago! Go Zac!”

Meanwhile, daughter, Amara went to school as the Queen Of Hearts.

Children weren’t the only ones braving the snow today to dress up as their favourite characters.

Gemma Atkinson dressed up as Gandalf from The Lord Of The Rings for her radio show, while Emma Bunton and Jamie Theakston became Where’s Wally and one half of Tweedle Dee and Tweedle Dumb respectively to do their Heart London breakfast show.

Did your children participate in World Book Day? Leave us a comment on our Facebook page @EntertainmentDailyFix and let us know what you think!