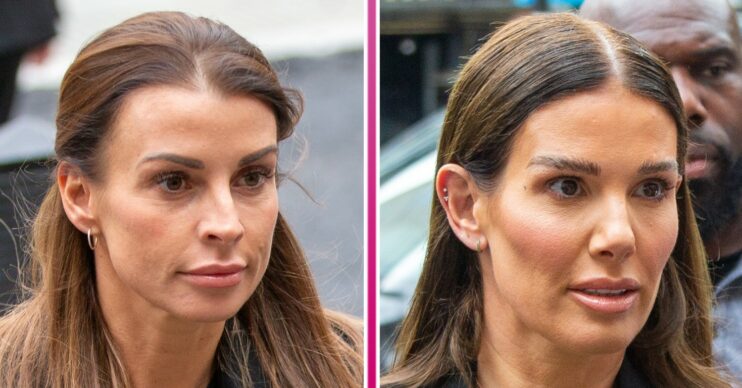 Coleen Rooney and Rebekah Vardy to go head to head again with rival TV shows, according to reports

Warring WAGs Coleen Rooney and Rebekah Vardy are set to go head to head again as separate documentaries telling their stories have reportedly been commissioned.

Coleen, 36, is said to have signed with Netflix for a show documenting the recent libel case.

Read more: Wagatha Christie case to be made into a Channel 4 drama?

According to The Sun, a film crew from Dorothy St Pictures shadowed Coleen during the trial, which took place in May.

A source told the publication it will be “classy and speak from the heart.”

Meanwhile, The BBC is said to be filming a documentary to put forward Rebekah’s view. This is reportedly being filmed by Curious Films production company.

According to The Mirror, mum-of-four Coleen is also in ‘advanced talks’ with another production company, Lorton films, the people behind her husband’s documentary, Rooney.

A friend of Coleen told the website: “Coleen has remained quiet ever since that famous online post.

“But this could all change in what could be the TV event of the year.”

They claimed she would show all the evidence she had that Rebekah was behind the story leaks. She also wants the public to “make their own minds up.”

She has reportedly also allowed cameras into her home.

The judge gave her verdict in the case dubbed Wagatha Christie  yesterday (July 29).

In 2019, Coleen had accused Rebekah of leaking stories about her to the press.

Rebekah denied the allegations and sued Coleen for libel.

The judge ruled in Coleen’s favour, claiming that the essence of Rooney’s social media post accusing Vardy was “substantially true”.

The judge also said that it was likely that Rebekah’s agent, allegedly with Rebekah’s help, had leaked stories about Coleen to the press.

Coleen issued a statement on social media after the verdict was announced.

“Naturally, I am pleased the judge has found in my favour in her judgement today,” she wrote. “It was not a case I ever sought or wanted.”

Coleen explained that before and after her social media post accusing Rebekah in 2019, she made “constant efforts” to avoid “such a public and drawn out court case”.

“Although I bear Mrs Vardy no ill will, today’s judgement makes clear that I was right in what I said on my Instagram post.”

She then went on to thank her legal team, family, friends, and the public, for their support.

“I brought this action to vindicate my reputation and am devastated by the judge’s finding,” she continued.

She added: “The judge accepted that publication of Coleen’s post was not in the ‘public interest’ and she also rejected her claim that I was the ‘Secret Wag’.

She then went on to say that she, her family, and her unborn child were subject to “vile abuse” after Coleen’s post.

“As I explained in my evidence I, my family and even my unborn baby, were subjected to disgusting messages and vile abuse following Coleen’s post. These have continued even during the course of the trial.

“Please can the people who have been abusing me and my family now stop. The case is over,” she added.

What’s your verdict? Head to our Facebook page @EntertainmentDailyFix and tell us what you think of our story.