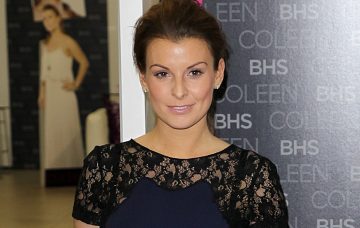 They've been enjoying the sunny weather!

Coleen Rooney has treated fans to a beautiful new family photo with her boys.

The 32-year-old shared a gorgeous snap to Instagram showing her basking in the sunshine with all four of her young sons.

Coleen appears to be enjoying the heatwave as she wears a red striped bikini and beams for the camera while sitting in a paddling pool.

She has youngest son, four-month-old Cass, in her lap, while her older sons Kai, eight, Klay, five, and two-year-old Kit surround them.

Her snap was simply captioned: “It’s the summer holidays.”

Fans were quick to comment on the picture, with one saying: “You look amazing Coleen and what a gorgeous family you have.”

Another wrote: “Have fun make lots memories summertime with your gorgeous family.”

It’s sure to be a VERY memorable summer for the family as Wayne, 32, has just signed for a US football club, DC United, based in Washington DC.

The footballer, who has been playing for Everton, has signed a three-and-a-half year deal with the Major League Soccer (MLS) team.

Of course, it’s led to questions about whether Coleen and the boys will leave the UK and move over to America with him.

So far there’s been no word from Coleen but Wayne hinted the whole family would relocate in a recent interview.

Wayne said living in New York or Los Angeles would have been “too hectic” for him.

Good luck with the move!