Coleen Rooney loves a rummage round this bargain store!

She reportedly has an estimated net personal worth of around £13million, while husband Wayne is said to be in the £100million bracket – so you probably wouldn’t think Coleen Rooney has much need for a nose for a bargain.

To be fair, the loaded mother-of-four is well known for being hugely down to earth despite her riches, but even so, her latest revelation on Twitter came as something of a shock.

Her bargain-hunting ways were revealed when a fan tweeted that the J-Lo song, Jenny from the Block, should be dedicated to Coleen Rooney.

The Twitter user had obviously spotted Col out and about in her native Liverpool, hitting the local shops in the Broadway area of the city. 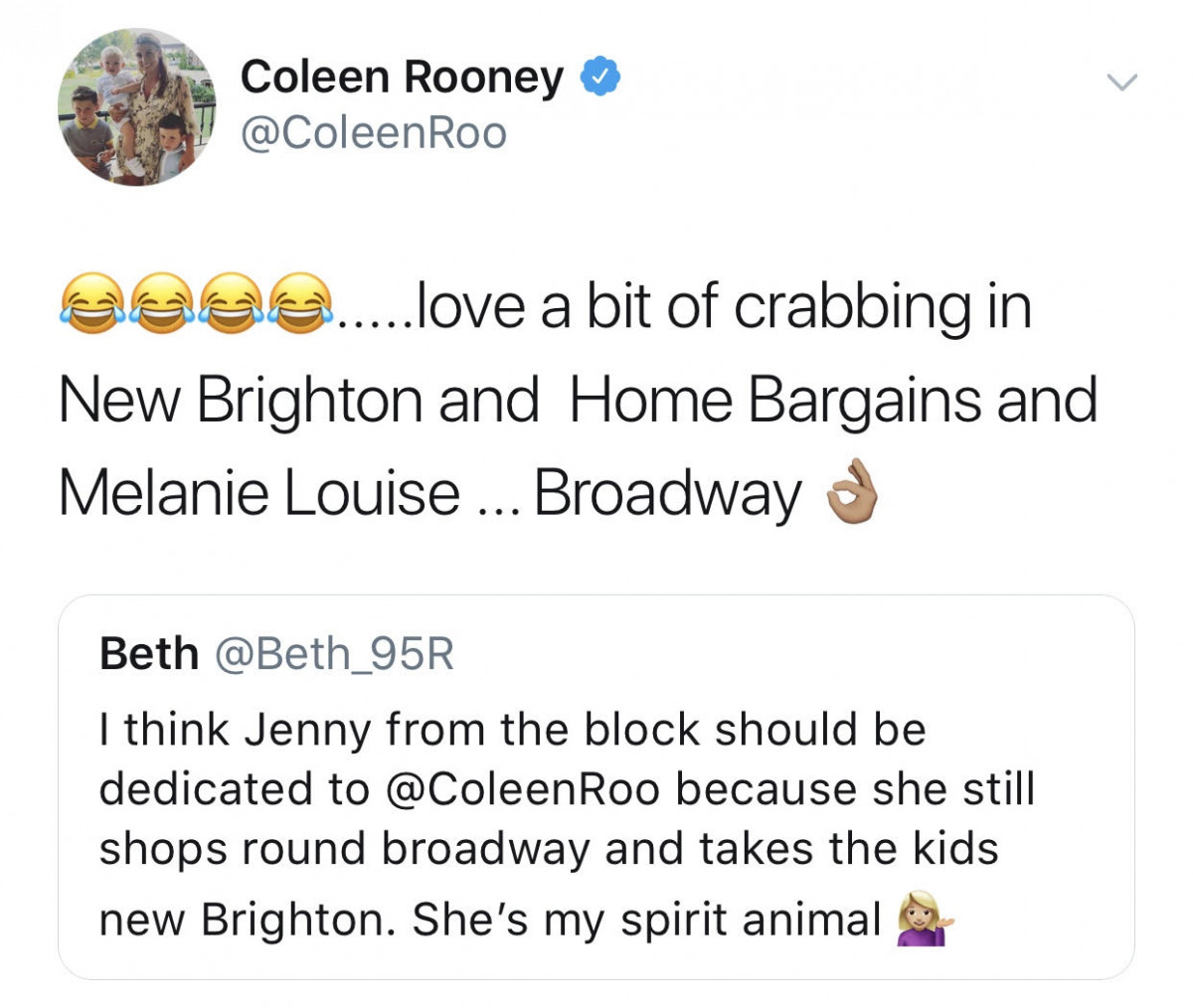 “I think Jenny from the block should be dedicated to @ColeenRoo because she still shops round Broadway and takes the kids New Brighton. She’s my spirit animal,” Twitter user Beth wrote.

Good-natured Coleen wasted no time in responding to the tweet, and was clearly amused by it.

Replying with four crying with laughter emojis, Coleen admitted the poster was quite right!

“Love a bit of crabbing in New Brighton,” she wrote. “And Home Bargains and Melanie Louise Broadway.”

For the uninitiated, Home Bargains is described on Wikipedia as ‘a chain of discount stores founded in 1976 by Tom Morris in Liverpool, England, as Home and Bargain’.

A quick peek at their website reveals ‘top brands, bottom prices’ bargains such as an  Iridescent 16pc Electroplated Rainbow Cutlery Set for just £10.99, and a Hugo Boss Man gift set for just £39.99.

However, with her ever growing brood, perhaps it was the bargain nappies that caught Coleen’s eye? We can’t deny that a 100 pack of Pampers for just £13.96 is an amazing buy!

It’s not all penny pinching and money-saving on the Rooneys’ shopping trips though – Coleen’s other retail-therapy name drop, Melanie Louise, is hardly the Primark of children’s clothing.

With their website showcasing baby boys’ Oilily brand tracksuits for an eye-watering £122, and a Kenzo three-piece set for a staggering £185.00, it’s clear to see why Col likes to cut costs in other areas of her spending…

We love that Coleen is keeping it real though – and proving just because you can splash the cash, doesn’t mean that you have to!