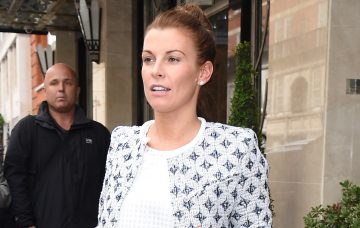 It's not easy being famous

Coleen Rooney has found herself making headlines after tweeting about winning a luxury handbag.

The mum of four divided fans after appearing to reveal on Twitter she’d won a Gucci holdall in a competition.

She posted a picture of the designer bag, writing: “Thank you so much @thecoolcard …. competition winner of this gorgeous bag!! 👌🏼❤.”

The Cool Card is a private members’ club that does competitions, as well as offering discounts and privileges.

Coleen, who is married to millionaire footballer Wayne Rooney, was criticised by some followers for ‘flaunting’ her prize.

One follower replied to her post: “Really Coleen didn’t think you were that shallow to advertise your freebies ‘winner’ really ? Stick to posting your lovely family pics.”

A second added: “As if… embarrassing 🙄.”

Meanwhile, others offered the TV star their support, writing: “Always a great feeling to win a competition regardless of the prize! Love it and good for you Coleen xx.”

A second tweeted: “Well Done 👍🏻 one ☝ can dream about this bag. If you get bored of it I would gladly take it off your hands lol 😂 much love ❤ to you and your family 😘 💋 x.”

Coleen, 31, recently welcomed her fourth child with her husband of ten years.

She broke the news on Instagram by sharing a black and white picture of their newborn son, who they have named Cass.

She also posted a very cute picture of her youngest on Instagram to celebrate Clay’s one week birthday!

Coleen captioned it simply with a blue heart emoji.

The TV star also took to Twitter last week, to share an adorable picture of her three other boys, Kai, eight, Klay, four, and Kit, two, in their costumes for World Book Day.

Kit wore a green suit and matching hat as he dressed up as Peter Pan from J M Barrie’s classic children’s novel.

Meanwhile Kai and Klay both have the same favourite character – or perhaps Klay wanted to be just like his big brother!

They donned big ears, green trousers and a brown waistcoat to transform into Roald Dahl’s BFG.

Do you think Coleen shouldn’t have tweeted about her new bag? Leave us a comment on our Facebook page @EntertainmentDailyFix and let us know what you think!