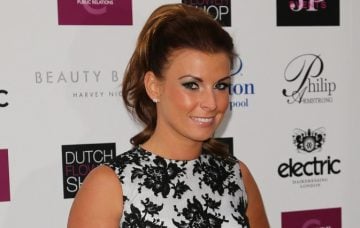 She joked it was an "emergency"

Coleen Rooney has shared a sweet moment from her family life with a photo of her youngest son.

The mum-of-four posted a snap of her baby son Cass having a bath in the kitchen sink!

Coleen shared the picture with her Instagram followers and revealed it had been an “emergency”.

The 33-year-old captioned her snap with: “Emergency sink bath.”

Fans loved her cute snap of her little one and some found her picture nostalgic.

“You haven’t had a proper childhood unless you’ve been bathed in the sink…brilliant,” wrote one of her followers.

“Is it a childhood if you don’t have one at some point?” added another of her fans.

A third wrote: “Are you even human if you haven’t bathed your kids in the sink?”

Coleen, who has four sons with footballer husband Wayne Rooney, is said to be excited to add to their brood and return to family life in the UK, after a stint of living Stateside in Washington for Wayne’s career.

According to reports, Coleen is keen to have another baby with Wayne once they are settled back in Blighty. He has now signed to play for Derby County.

A friend told The Sun: “She has always loved being a mum and still feels their family could expand further once they’re back. It wasn’t feasible in the US but when they return, another baby is a definite possibility.”

It’s believed Coleen is already in the process of moving back and Wayne will come back to the UK in a couple of months, with the footballer set to fly back and forth in the meantime so they don’t spend too much time apart.

Read more: Kerry Katona reveals the self-help strategy she has turned to

The couple, who have Kai, nine, Klay, six, Kit, three, and 15-month-old Cass, are planning to move into the £20 million mansion they have had built in Cheshire.

Let us know what you think of our story on our Facebook page @EntertainmentDailyFix!