The panellist confirmed the sad news we'd all suspected

Coleen Nolan has finally responded to a question that we all wanted to know the answer to.

The answer is yes. Nooooo!

The Loose Women star was discussing marriage when she admitted: “Don’t you think there’s a pressure all the time in relationships? 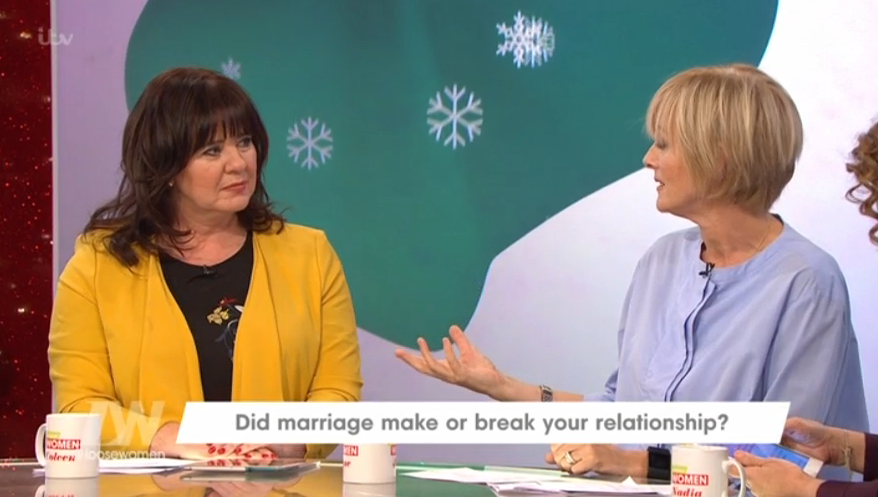 “As soon as you get engaged, as you’re showing someone the ring they’re going, ‘When are you getting married?’

“Then the day you get married it’s, ‘When are you having children?’

“With Jake and Jesy when they first got engaged, instantly all the press – everyone was asking me – ‘When’s the wedding?’ There’s so much pressure on relationships.

“People keep asking when they were getting married and I was asked when the wedding was.”

She then confirmed that her son had split up with the Little Mix star.

Ruth asked: “Have they actually split up?”

Coleen added: “Yeah. But it’s kind of amicable and they’re dealing with it really well and they’re both good friends.”

This comes as Jesy spoke in an interview with the Daily Mirror about how to get over a relationship split.

She said: “You have to go through stages – crying it out, being around your friends, just having that support.

So why did they split?

An insider told Reveal that Jesy, 25, is “constantly” talking about being a mum and wanted to start trying for a baby as soon as she got married in May.

But that was not the case for Jake, who doesn’t feel ready to be a dad.

Read more: Has Stephanie Davis secretly given birth? Her fans think so!

“He feels they have their whole lives ahead of them to start enjoying kids when the time is right.

“She is only a year older but is much more emotionally mature and she was always very clear with Jake that, as soon as she got married, she would want to start the next big chapter in their lives together.”