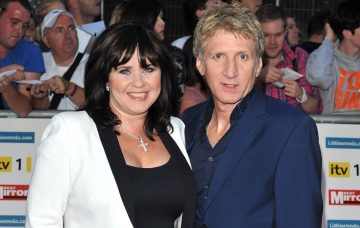 She said it's been a very difficult twelve months

Coleen Nolan has split from her husband of ten years, Ray Fensome, after a “hellish” twelve months.

The Loose Women star, 52, used her Mirror column to break the sad news with fans, saying the couple had grown apart and their division couldn’t be healed.

“Me and my husband Ray are divorcing,” she said.

Coleen, who told readers she was in tears over the break up, went on to say she’d always thought she’d grow old with Ray, but unfortunately it wasn’t meant to be.

Read more: Katie Price says “nothing is off limits” in new series of her reality show

“There is too much dividing me and Ray. We can’t go back. And my future is going to be very different to the one I’d imagined back then.”

Coleen said she’d “fought with every fibre” in her being to save the marriage but then came to a point where she realised the relationship could not be saved.

She wrote in the column she and Ray are keeping their split amicable, and she’s now looking to the future.

“I deserve to be happy. Everyone does. And once you know your marriage is truly dead you need to make your peace with that, bury the past and move on,” she said.

“After 17 years together that’s what I’m about to do.”

It said: “Sad to announce that after much hard work and many efforts to save her marriage Coleen has now filed for divorce.”

A string of hashtags were also shared including “no going back” and “only going forward”.

Coleen and Ray have one daughter, Ciara, while Coleen has sons Jake and Shane Jr from her marriage to ex-husband Shane Richie.

The television presenter has been open in recent years about her marriage troubles.

In 2016, she told The Sunday Mirror that she was keen to have counselling with Ray after their relationship hit a rocky patch.

She later told Loose Women: “We have had nearly 17 years together and I think it’s worth fighting for and I’m going to fight for it.

“I’m not going to guarantee it is going to work but I am going to try, I just want us to be really happy, whatever road that takes us on.”

Coleen also spoke about her fears for the marriage while cooped up in the Celebrity Big Brother house in 2017.

“I do think I’m having a midlife crisis, I don’t think it’s all him,” she said. “I’m questioning everything – am I happy? I’m not putting all the blame on him. It’s just really sad.”

Afterwards, she told Daily Star that doing CBB had made her realise how much she wanted to fight for her marriage.

“I missed Ray while I was in the house, which was great. It’s made me realise how much I do need him in my life,” she said.

“Doing the show has helped a lot. It’s put a lot of things into perspective. There was so much time to think about things. It’s made me realise life is actually quite good.”

Many fans have been inundating Coleen with support since the news broke. 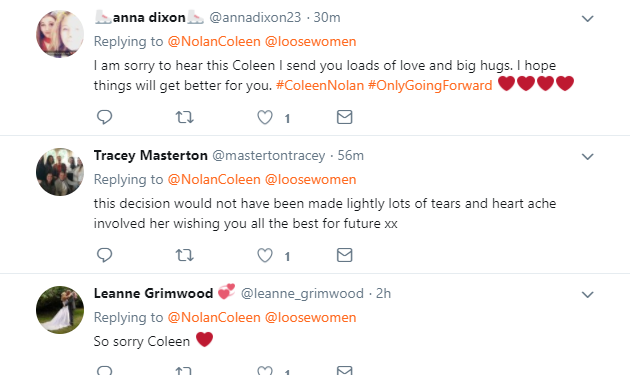