Coleen and Wayne Rooney enjoy a day at the races

The couple mark their tenth wedding anniversary in June

Coleen Rooney has shared a picture with husband Wayne as they enjoyed a rare child-free outing together.

The couple dressed to impress for the Chester Races on Thursday, with Coleen posting a snap to Instagram from their big day out.

Coleen, 32, looked lovely in a green and white dress with floral print, while Everton footballer Wayne, 32, wore a dark suit and tie.

The pic was posted to Instagram with no caption other than “Chester Races.”

It’s the first photo of Coleen and Wayne together that has appeared on her Instagram since December 2017.

One fan said: “Best wishes in your futures you look amazing both of you.”

Another added: “Love seeing the two of you together ❤ Hope your family doing great.”

A third said: “Awe what a lovely picture and Coleen you look happy hun x 😘.” 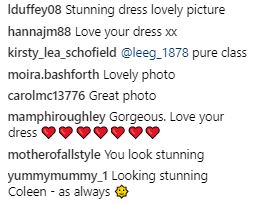 The couple are preparing to mark their ten-year wedding anniversary in June.

They married in Italy in June 2008, tying the knot at the 17th century Villa Durazzo in Santa Margherita Ligure, before celebrating with a reception at a nearby 700-year-old former abbey.

The couple’s marriage hit the headlines last September when Wayne was arrested on suspicion of drink-driving as he drove another woman home in her car.

He admitted drink-driving in court and was banned from the roads for two years and given 100 hours of community service.

At the time, there was weeks of speculation about the state of the Rooneys’ marriage, before Coleen silenced the critics once and for all with a lengthy Facebook statement.

Earlier this week, Coleen ruled out trying for a fifth child, telling The Mirror: “I was never obsessed with having a girl in the first place. It would’ve been nice but I’ve got the boys.

“I’m done having any more, definitely. I have always said I would like three children, so four was pushing it.”