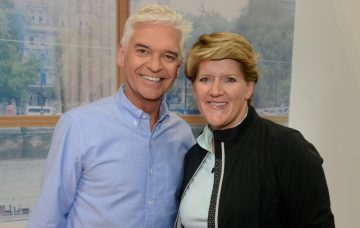 Phillip Schofield has joked he’s got the raw end of the deal when it comes to royal wedding coverage.

The television presenter is co-anchoring ITV’s coverage of Prince Harry and Meghan Markle’s wedding on Saturday, meaning he’ll be dressed to impressed and brimming with royal wedding facts.

Meanwhile, over on rivals BBC Radio 4 and Radio 5 Live, it will be Clare Balding keeping listeners updated on all the happenings from Windsor.

And according to Phillip, he’s got the harder job!

On Thursday, Phil was joined by Clare at This Morning Live in Birmingham, ahead of their rival royal wedding clash!

The star joked: “I feel like I’m reading so much material. There’s so much to remember. Unlike you I can’t look at all my notes when I’m on air as I’m on TV.”

He added: “That’s the advantage of radio!”

Clare, however, pointed out Phillip has the advantage of pictures and television cameras, whereas her listeners will just have her voice and words to guide them through the event.

“The pressure is different on radio. I have to paint a picture with words, but the benefit is that I can look at my notes if I need to!” she laughed.

“Not like Phillip when he’s on camera. I’ve been buying every magazine and making lots notes. I went to Windsor to do a technical walk through and I made sure I bought the souvenir guide!”

Clare agreed one advantage of being on radio is she won’t have to don her finery to blend in with the wedding crowds.

She added: “I’m very excited and a little nervous. I’ve obviously met the Queen and Prince Harry, William and Kate – although I’ve not met Meghan.”

Clare popped by This Morning Live to support her friend, who has a women’s fashion stall called Boudavida on show.

She wore the brand’s performance activewear during her visit to Birmingham; five per cent of every sale supports a women and girls’ sports project.

Harry and Meghan will marry at midday on Saturday at St. George’s Chapel at Windsor Castle.

Phil will be broadcasting alongside ITV News at Ten’s Julie Etchingham from a specially constructed studio on The Long Walk in Windsor.

The channel’s coverage, Harry and Meghan – The Royal Wedding, will kick off at 9.25am and continue until 3pm.

Phillip recently said: “So happy to be back with Julie, my royal wedding partner (we don’t get to work together very often!) and the brilliant team at ITV News.

“Put your hat on, we’re going to have a party!”

Julie added: “I’m delighted to be working on the royal wedding – and teaming up again with Phillip, just as we did in 2011 and for the Diamond Jubilee.

“It’ll be a day of big celebrations not only in Windsor but around the country – and it’ll be huge fun capturing the spirit of a great British occasion.”

This Morning Live is on at the NEC Birmingham until Sunday 20 May. Doors open 10am – 5pm daily. Tickets can be purchased online or from the ticket office.