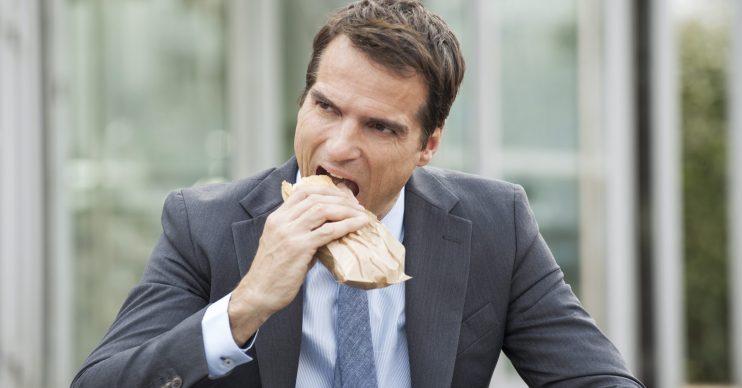 He was clearly too hungry to pay…

We’ve all been there. Hungry strikes, you see a tasty morsel, grab it quick and scoff it.

However, one high-flying city worker was obviously in such a rush to gobble down his lunch that he forgot to pay for it.

And, as he allegedly took the sandwich from his staff canteen, he has now been suspended.

BBC News reported that the man, who worked for Citigroup in London’s Canary Wharf, has been suspended and “removed from his post” after “stealing food from the staff canteen”.

The trader, named as Paras Shah, is said to have been earning around £1 million per year, including bonuses.

He was suspended after allegations that he helped himself to sandwiches from the staff canteen.

Read more: Amazon is selling a wine glass holder that lets you have a cheeky tipple in the shower

We also don’t know if he favoured ham and cheese, cheese and pickle or coronation chicken sandwiches.

However, some say the man has been treated too harshly by his company.

If you knowingly take something that you are supposed to pay for, then it is theft, regardless of your position in a company or how much you earn.

One worker said it happened to him once after he was “lost in thought”, grabbed a sandwich and headed back to his desk.

“It was only after I snapped out of that thought I realised I didn’t pay for my food. I went back to canteen and admitted that I forgot to pay and made the required payment. That was the end of it,” the man said.

Another said he thinks there may have been more to the story than meets the eye.

Read more: Mini KitKat Biscoffs are available to buy in the UK and chocoholics say they’re a “dream come true”

He told the site: “It wouldn’t surprise me if it was an accepted practice which is being used as an excuse to fire him rather than pay him to leave. Stranger things have happened.”

However, some said that he should be subject to the company’s disciplinary procedure, even if the theft was relatively small.

“If you knowingly take something that you are supposed to pay for, then it is theft, regardless of your position in a company or how much you earn,” one person commented.

However, some said it was “suspicious” that the man’s suspension came just before the company was due to pay out bonuses to staff.

There could be more to it, corporate world is slimy beneath the surface. Why would he steal sandwiches if he’s making a million per year? It’d be more believable if he did financial fraud of billions, but suspended for stealing food just before bonus time, is food for thought.

The Telegraph asked Citigroup: “Have you suspended Paras Shah for stealing sandwiches?”