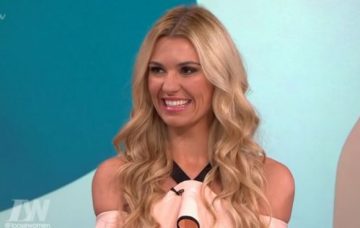 She said the couple are putting more effort into their marriage

Christine McGuinness has opened up on the state of her marriage to husband Paddy, following recent rumours of a rocky patch.

The mother of three was a guest panellist on Thursday’s episode of Loose Women, where she said things had been “difficult” recently but they are now happier than ever after putting the “effort” into their marriage.

Christine, 30, spoke during a discussion on how children can change relationships.

She and Take Me Out host Paddy, 44, are parents to four-year-old twins Leo and Penelope, who are autistic, and one-year-old Felicity, who is showing signs of autism.

Read more: Stacey Solomon hits back at criticism of her new hairdo

Christine said: “I do most of the childcare. I chose to do it and I’ve got absolutely no regrets although it’s been really difficult recently.

“But I try to take the positive from everything and it has made me realise that, actually, I want to spend more time with him, and get that back, and try and do more things together.”

Christine, who has been with Paddy for 11 years, said: “I just wanted to be a full-time stay-at-home mum, that’s what I wanted to do, so when the twins were four-days-old, I waved my husband off to work, ‘go on, bye love it’s fine, I’ve got this all under control’.

“And he fully focused on work, which is again, what we both wanted at the time. He provided in that way and I stayed at home looking after the children.

“Only recently I’ve started thinking, ‘Do you know, I wish he would stay at home a little bit more’, or I should go with him.

“It’s taken this time to realise and for us to be able to leave the children, it’s not so easy for us to do that, but we’re happier than ever right now.

“It’s great that we’re putting the effort in, it’s lovely, it’s nice. Working at it is quite good, it’s actually exciting, you know?”

Christine continued: “There’s been so many times where he’s left to go to work and I’ve waved him off and said ‘Yeah this is fine, go and enjoy your work’ and then I’ve sat and cried, thinking ‘I really wished you would have stayed.’ That’s a lack of communication.”

The star said she doesn’t regret placing all her attention on the child, but added: “I just hope that my husband didn’t feel too pushed out, because he needs attention, too. I need attention, too.”

Christine also spoke during the show about the anxiety she’s suffered since becoming a mother.

She told the panel how she burst into tears on a recent flight to Morocco as she so was so upset about leaving her kids at home for the two-day business trip.

“I’m absolutely obsessed with my children and rarely leave them,” she said.

“I’ve been a full time at-home mum and hardly ever leave them, but part of my guest role on Real Housewives of Cheshire was to go to Morocco for two nights, and it filled me with fear and anxiety and stress, more than I’ve ever felt before.”

“I got on the plane and burst into tears and had quite a big panic attack,” she recalled.

“I think it was a combination of things as I’ve never been away from them for two nights, never been that far, and don’t like flying anyway.

“I think I have a fear of dying, not so much a fear of flying. This worry that if anything happens to me I’m leaving three children without a mum, and it really hit me on the plane.

Can you relate to Christine’s feelings about leaving her children? Leave us a comment on our Facebook page @EntertainmentDailyFix and let us know.