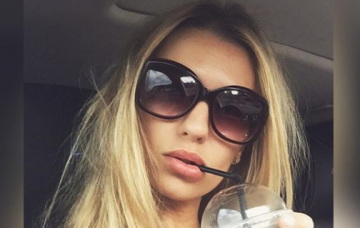 When going on holiday, it’s important to be respectful of local cultures and traditions.

And when you’re a celebrity, you have to follow an even more complicated set of rules when it comes to then posting your holiday snaps online!

Paddy McGuinness’s wife Christine recently fell victim to some online comments during a holiday in Marrakech.

The former model took an opportunity to update some fans on her holiday, by posting a series of sizzling bikini snaps.

She captioned the image: “I had 5 minutes to myself in complete privacy. I don’t think I’ll be in a bikini again for a long time… I’m an awful flyer and there is no sunshine at home!”

However, one commenter remarked that posting bikini images online doesn’t really lend itself well to the concept of ‘privacy’, in comments that have since been deleted.

Read more: Helen Skelton hits back at critics of her charity boxing match

However, Christine jumped into the argument to defend her choice of both clothing and what images to put on her Instagram account. 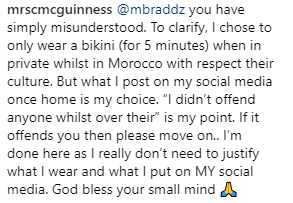 She wrote to the user: “You have simply misunderstood. to clarify, I chose to only wear a bikini (for 5 minutes) when in private whilst in Morocco with respect their culture.

“But what I post on my social media once home is my choice. ‘I didn’t offend anyone whilst over their [sic] is my point.

“If it offends you then please move on. I’m done here as I really don’t need to justify what I wear and what I put on MY social media. God bless your small mind.”

Fans were also quick to jump to Christine’s defence after others speculated a mum shouldn’t be posting bikini snaps in the first place.

One wrote: “Being a mum doesn’t mean you can’t have body confidence and teach your kids to be confident in their skin”.

Another said: “A lot of jealousy on here she looks amazing”. 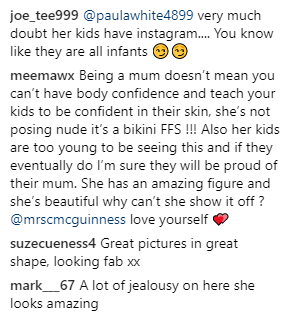 Christine’s Moroccan adventure has proven to be a timely distraction amid media speculation over her relationship with husband Paddy.

The couple, who have been married since 2011 and have three children, saw their partnership put under the spotlight recently.

There were rumours of Christine being deeply upset with images showing Paddy out and about with former All Saints singer Nicole Appleton.

But the duo are said to be getting the relationship back on track and have stepped out to public events together.

It seems Christine is more than capable of defending herself, so we wouldn’t want to be in Paddy’s shoes the next time he forgets to do the washing up!

Do you think Christine is right to post what she likes? Leave us a comment on our Facebook page @EntertainmentDailyFix and let us know what you think!