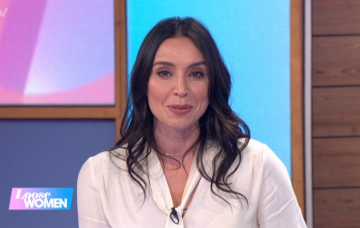 Christine Lampard had a crush on Eamonn Holmes when she was a teenager.

The 40-year-old presenter grew up in Northern Ireland watching Eamonn – who is from Belfast – on her television screen and she admits she had a thing for the anchorman and would tune in to see him every day before school.

During a panel discussion about celebrity crushes on Loose Women on Friday (22.03.19), she confessed: “You know who mine was … Eamonn Holmes!

“I just loved Eamonn Holmes. He was very handsome, he was on morning telly, you watched it before you left to go to school in the morning.

“He was really funny! He came from Northern Ireland.”

Christine eventually got to meet Eamonn, 59, when she started working for the BBC and she was absolutely thrilled to get to make him a cup of tea.

Recalling their first encounter, she added: “I was about 17 and I was working at BBC and I was a runner. So I basically had to make Eamonn’s tea.

Eamonn is married to Loose Women regular Ruth Langsford, who is famous for getting jealous over her hubby, and she was missing from the programme because the husband-and-wife duo were presenting This Morning.

And Christine confessed she would have been reluctant about sharing her soft spot for Eamonn if Ruth, 59, had been on the panel.

She said: “I wouldn’t have declared it if Ruth was here today!”

Christine recently returned to work on Loose Women following her having her baby daughter Patricia, whom she has with her husband, Derby County football manager Frank Lampard.

Do you have any embarrassing celebrity crushes? Leave us a comment on our Facebook page @EntertainmentDailyFix and let us know.