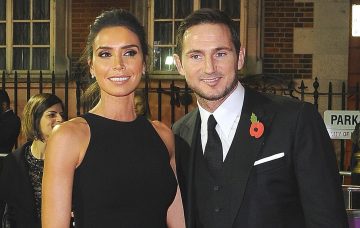 Christine Lampard reveals secret to success of marriage with Frank

Christine Lampard opened up about what makes her marriage work, after being put on the spot on Loose Women.

As the panel were discussing how to cope with relationships that fail, in the wake of Ant McPartlin’s divorce, Saira Khan claimed that Christine’s footballer husband Frank knew the secret to a happy relationship.

“I understand that Mr Frank Lampard has all the answers to what makes a loving relationship, Christine,” Saira said.

“Does he?” Christine retorted with a smirk, before Saira pressed on, quoting an interview with the Guardian.

“When he was asked the question ‘what makes for a long and happy relationship,'” she continued, “he said, ‘The secret to a good relationship is to keep fancying each other.

“‘Christine and I make each other laugh and have fun, but I am sure we fancy each other more and more as time goes by.'”

Christine said she agreed with her husband, claiming that being able to laugh together is central to their relationship.

“I’ve always said that being with someone you can properly belly laugh with and you don’t need anyone else to contribute to the conversation is really special,” she said.

“And definitely the fancying thing, because you’ve got to still look at them and go, ‘That’s my husband’ or ‘That’s my wife’. I mean, if you can do that, I think that’s special.”

Christine and Frank started dating in 2009 and married in 2015, with Christine becoming step-mother to Frank’s daughters Luna and Isla, with his former fiancée Elen Rivas.

Christine claimed that her feelings for her husband have only grown over the years.

“December was our anniversary,” she said, “so we’re married just over two years. But we’ve been together just over nine. I look at him now and I still feel exactly the way I did when I first met him, if not more.”