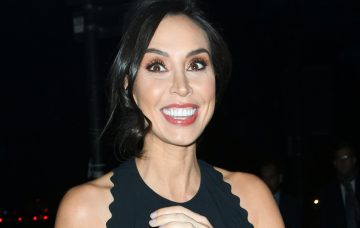 Christine Lampard looked the picture of happiness as she enjoyed her first night out since welcoming her daughter.

The television presenter, 39, beamed for the cameras she returned to the spotlight on Monday to support husband Frank at the Legends of Football Awards in London.

Christine and Frank, 40, posed on the red carpet together at the Grosnevor Hotel.

It marked the first time Christine has been seen in public since giving birth to her first child, Patricia Charlotte Lampard, two weeks ago.

She stunned in a black cocktail dress that fell below the knee and featured a scallop neckline.

Christine was at the event to support footballer-turned-manager Frank, who picked up the Legend of Football Award on Monday night.

It was in honour of his glittering career across domestic clubs including Chelsea and playing for England.

Previous stars inducted into the Legends’ Hall of Fame include David Beckham.

Frank, who manages Derby County, said it was a “real honour” to be recognised.

Other stars in attendance included Christine’s fellow Loose Women panellist Jane Moore, who shared a photo of them together to Instagram.

Christine and Frank welcomed Patricia, their first child together, on September 21.

They announced her arrival by sharing a beautiful image to social media showing Christine cradling the newborn in her hospital bed while Frank stood proudly next to them.

Frank is also dad to daughters Luna, 13, and Isla, 11, from his relationship with Elen Rivas.

Do you remember your first night out after having a baby? What did you do? Leave us a comment on our Facebook page @EntertainmentDailyFix and let us know!