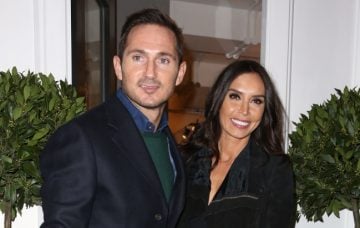 Christine and Frank Lampard announce the birth of baby girl

Christine Lampard has given birth to her first child with husband Frank.

The Loose Women panellist, 39, and her retired footballer-turned-manager husband, 40, announced the joyous news to fans today.

Christine shared a photo from her hospital room showing her cradling the newborn baby girl, who has been named Patricia Charlotte Lampard.

She told fans: “Let us introduce you to our little girl. Patricia Charlotte Lampard! We’re so in love.”

They’d chosen not to discover their baby’s sex ahead of the birth.

This is Christine’s first child and Frank’s third; he’s already dad to daughters Luna, 13, and Isla, 11.

Christine later explained of why they waited: “As anyone who goes through this [knows], you can’t help being a bit anxious. And I’m a bit superstitious, to be honest, as well. I kind of thought, ‘let’s get to the big scan and be told hopefully everything is okay so far.’

“I was just really tentative about announcing something and then maybe something happening.

“Of course, we know that can happen at any stage, but I did want to try to get as far as I could – and telling the girls [husband Frank’s daughters] and everything else.”

Christine has spoken previously of how excited Luna and Isla were to become big sisters.

She told ITV’s Lorraine: “The girls are completely beside themselves, more so than I thought they would be. It does have to a girl, but I can’t guarantee that! They are desperate for a little girl! They’re constantly talking to the belly, constantly chatting and wanting to be the first name it says. It’s just lovely.”

The Northern Irish star also said the couple wanted Luna and Isla involved in picking the baby’s name, after the girls had already come up with a few suggestions!

“Nothing ridiculous – they’re all very good!” she told OK! Magazine. “And it would be lovely to pick something that the girls have chosen.”

Christine went on maternity leave at the end of August, hosting her final ITV’s Lorraine, where she’d been covering while Lorraine Kelly was on a summer break.

She was thrown a TV baby shower and sent messages from fellow TV pals, including Piers Morgan and Phillip Schofield.

The star told viewers: “I feel really good. I fell a bit nervous now, I feel like I’ve been in a lovely bubble for the past few weeks on this show. Now that it’s done, this is going to happen. But I feel good, very good.”