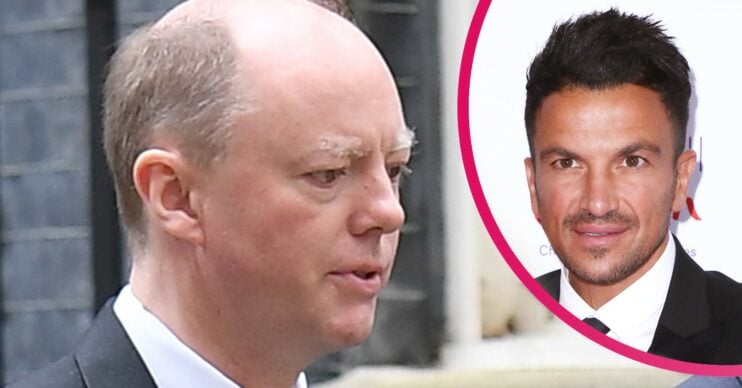 Chris Whitty was captured on camera being physically manhandled by two strangers in St James Park, London, shocking abuse that has appalled the nation.

The Chief Medical Officer Professor Chris Whitty, 55, was assaulted by two men while walking through the park.

They grabbed and pulled at him, and also at one point one attempted to put him in a headlock.

Amid much public uproar, singer and reality television star Peter Andre, 48, has lashed out at the culprits.

In fact, he took to Twitter to share his disgust at the act and shared his sympathy for Whitty.

What did Peter Andre say about Chris Whitty?

Addressing his Twitter followers, Pete tweeted: “Not a lot of things upset me but this is disgusting. This poor man.
@CMO_England.”

Many of Peter’s followers appeared to agree with the Mysterious Girl singer’s sentiments entirely.

While another user tweeted: “Poor guy, not the first time he’s been subjected to pointless humiliation. Made me feel sick for him watching it. Hope those two face some repercussions for their act or stupidity.”

A third user argued: “Seeing this really upset me and infuriated me at the same time. What has it come to that this poor man can not even go for a stroll in the park. Like him or not he doesn’t deserve this. I hope they all get caught and punished.”

Yet another claimed: “I’m not a fan of the fella but the bully boys were totally out of order.”

Not a lot of things upset me but this is disgusting. This poor man. @CMO_England pic.twitter.com/HGgXgMWKFQ

What have the police said about the Chris Whitty attack?

Police are now investigating the incident, and the Professor may even receive future police protection.

The Metropolitan Police issued the following statement: “We are aware of a video being shared online showing an incident in St James’s Park. Officers spoke to all those involved at the time and their details were taken.

“We are in contact with the victim and the circumstances continue to be investigated.”

Meanwhile Prime Minister Boris Johnson tweeted his own disgust at the incident.

“I condemn the behaviour of these thugs. Our hard-working public servants should not have to face this kind of intimidation on our streets and we will not tolerate it.”

“Chris Whitty is a dedicated public servant who has worked tirelessly to help get us through this crisis.

“The police are right to investigate this harassment.”