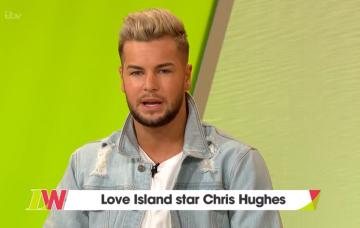 He had several procedures to combat the condition

Love Island star Chris Hughes has revealed he is planning to have his sperm frozen after suffering a medical scare when he was 14.

During an appearance on Loose Women Thursday, Chris opened up about his battle with a varicocele, which is a collection of enlarged veins within the scrotum.

Chris, 34, told the panellists that the condition put him at risk of being infertile, so he has decided to freeze his sperm.

Speaking about his health scare, Chris revealed he first noticed something abnormal with his testicle when he was 14, but didn’t consult with a doctor until he was 20.

“I had to examine myself which obviously you guys were talking about,” he said. “But it’s important men do it too.”

Chris explained that he had a build-up of veins on his left testicle, which had come from his kidney.

“I noticed it when I was 14,” he continued. “I’m not a nervous person and I don’t get shy so, for me, it was a surprise looking back that I didn’t just go to a GP at that age.”

The reality star revealed he also had a hydrocele on his right testicle, which is a sac filled with fluid that forms around a testicle.

“The hydrocele was an easy operation,” he said. “They turned it inside out which took all the pressure of the fluid away from the right testicle.

“But the left one had a cluster of veins around it. Those veins use oxygen and they take that away from the testicle. As a precaution, I got my sperm frozen.”

Chris revealed he underwent a number of operations in the hope of getting rid of the problem.

“I had three operations to try and fix it,” he said. “It started with keyhole but that didn’t work.

“They then cut into my ribs and coiled the veins from my kidney to try and kill them off and make them shrivel away – but that didn’t work.

“Then they cut through the pubic region and they coiled them right at the place and now it’s kind of working.”

Jane Moore asked the star if he would advise all men to go and get their testicles checked out.

“100 percent,” Chris replied. “My brother did and my brother is now completely infertile but he had a miracle child.

“He never thought he would be able to have one and they tried for a second, spent thousands going private to try and create a second but unfortunately it never worked.”

Chris also said his cousin had testicular cancer, so he would encourage people to be precautionary.

Meanwhile in the interview, Chris also opened up about his love life and revealed he is 100 percent single, despite recently being linked to actress Georgie May Foote following his split from Olivia Attwood.

When asked if he was dating anyone right now, he said: “Nobody right now. I’m waking up stress free and happy.”