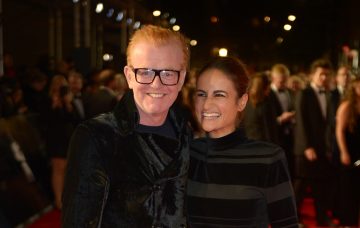 Chris Evans has announced he’s going to be a father for the fourth and fifth time!

The telly favourite revealed the happy news on his BBC Radio 2 show on Monday morning, telling listeners his wife Natasha Shishmanian is pregnant with twins.

It was Chris’ first day back at work following the Easter holidays.

Chris, 52, broke the news when he asked for advice about having twins, saying: “Mrs Evans is, she is. Double trouble, twin turbo. We have known for a while, obviously. She is definitely the mother, no doubt about that.”

The former Top Gear host said he had tried to break the news to their five-year-old son Eli.

He said on the show that the little boy “has got a shock and a half coming, he’s got a double shock coming”.

Watch out 2018, The Evans Twins are on the way… 👶👶@achrisevans finds out if Mrs Evans needs to eat for 3 and what pregnancy cravings actually mean from @henriettanorton https://t.co/arZ7DgciKO pic.twitter.com/sGIYO6blqG

Chris told listeners: “We tried to tell him, he doesn’t quite get it yet. Eli is mum’s best mate. That is going to change, my friend.”

He added: “I’m looking forward to lots of curries and cravings.”

Listeners were quick to shower Chris and Natasha with congratulatory messages on Twitter – and offer their own words of advice! 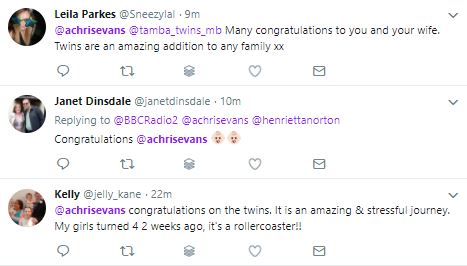 Chris and Natasha married in 2007 and are also parents to son Noah, nine.

The radio star has a daughter, Jade, 32, from his former relationship with Alison Ward.

Leave your congratulations for Chris and Natasha on our Facebook page @EntertainmentDailyFix!