Gogglebox’s Chris Butland-Steed quits the show – and will be replaced by ex Stephen Webb’s mum!

This is a big loss!

The hairdresser, known for sharing the sofa with his former partner Stephen Webb, said he wanted to “take the plunge” to “pursue a career in TV”.

“After 10 series, a wedding, and a helluva lot of takeaways, our lovely dogs and I have decided it’s time to say a very fond farewell to our Gogglebox family,” he told fans on Twitter.

Read more: Gemma Collins divides the nation with her method for cooking eggs

“I’ve loved every minute of being on the show and will never forget all the amazing things it’s allowed me to do.”

Chris has appeared on Gogglebox with Stephen since the first series five years ago, despite the couple splitting up.

He married boyfriend Tony Butland in 2017.

“Since my wedding, it’s felt like there should be a new start, so I’m taking the plunge to see what’s out there!” he wrote.

“I’m really looking forward to what the future holds, especially pursuing a career in TV, as I hope to show viewers that I have many more talents. So, watch this space!”

Among those who responded to Chris’ message was husband Tony, who wrote: “My darling husband, to me, you have always been, and will always be, a superstar. 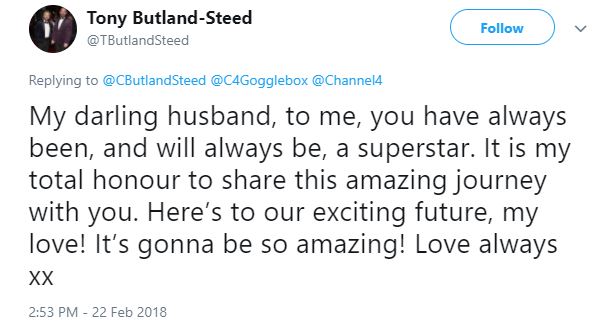 “It is my total honour to share this amazing journey with you. Here’s to our exciting future, my love! It’s gonna be so amazing! Love always xx.”

Other members of the Gogglebox family also reached out to to him.

Fans were quick to tell Chris how much they’ll miss him and wish him all the best for the future.

According to The Sun, Stephen will now share the sofa with his mother.

A source said: “It will be interesting to see if Stephen works as well with his mum as he did with Chris. She has briefly appeared on the show but not for a full series.

“Chris is one of the show’s most flamboyant characters and he will be really missed.”

A rep for Gogglebox said: “Chris has decided to pursue other opportunities but we want to thank him for his fantastic contributions across ten series.”

Former Gogglebox stars include Scarlett Moffatt, who was crowned Queen of the Jungle in I’m A Celebrity … Get Me Out Of Here! in 2016, and Leon Bernicoff, who died last year, aged 83.

Are you sad to see him go? Leave us a comment on our Facebook page @EntertainmentDailyFix and let us know what you think!