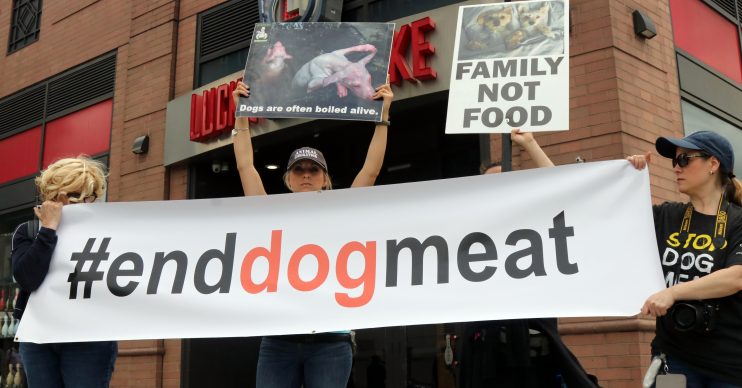 Hopes this will bring about the end of dog meat festivals

A city in China has banned sales of dog and cat meat, according to a tabloid report.

Activists now hope the new law will mean the end of ‘wet markets’ – where live animals are sold and butchered for their meat.

Some scientists believe these markets can be a breeding ground for viruses to spread between species. They suspect coronavirus may have originated in bats and spread within such trading places.

The Sun reports other animal meat such as snakes, frogs and turtles will also be banned.

The new law in Shenzen, a city of about 13 million, will reportedly come into effect in May.

The controversial Yulin dog meat festival is 300 miles from Shenzen.

But there is hope the new law will set a precedent.

Dog meat is not part of the mainstream Chinese diet. But, according to The Sun, the trade produces 97,000 tonnes of meat each year.

Read more: Olly Murs apologises to girlfriend after throwing her into swimming pool

Lawmakers regard livestock such as pigs, cows, sheep, donkeys, rabbits, chickens, ducks, geese and pigeons as suitable for human consumption, as well as fish.

He reportedly said: “With Shenzhen taking the historic decision to become mainland China’s first city to ban dog and cat meat consumption, this really could be a watershed moment in efforts to end this brutal trade that kills an estimated 10 million dogs and 4 million cats in China every year.

“Shenzhen is China’s fifth largest city so although the dog meat trade is fairly small there compared with the rest of the province, its true significance is that it could inspire a domino effect with other cities following suit.”

TV actor Peter Egan recently criticised the markets on Twitter as he shared a petition against them.

He wrote: “Wet markets are inhumane to animals and breeding grounds for diseases.”