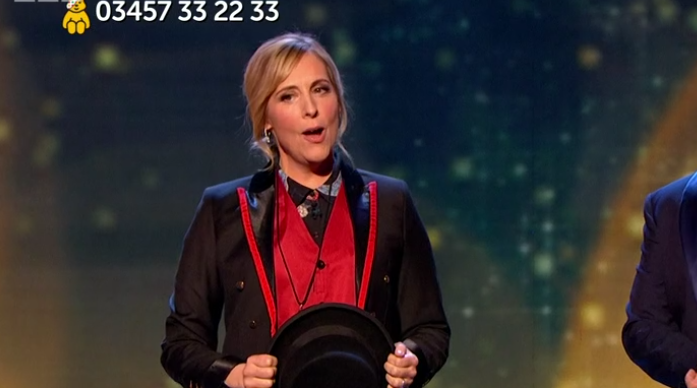 However, some viewers watching the charity fundraiser have claimed former Great British Bake Off presenter Mel Giedroyc ruined the annual BBC show for them.

Some accused her of cutting guests off and talking over people, while others said she ‘spoiled’ the Rickshaw Ride segment.

One wrote: “Felt sorry for Mark Wogan there, he was clearly emotional and nervous and out of his comfort zone. Cue Mel Giedroyc mauling him and making it about her ‘comedy’ act. Embarrassing.”

While a second tweeted: “For heaven’s sake will Mel Giedroyc step out of the way, stop butting in, stop gesticulating and let these Rickshaw challenge kids justifiably take the limelight and plaudits they undoubtedly deserve.”

Can someone please tell Mel Giedroyc to stop interrupting everyone please? She’s not funny, she’s just rude and annoying #ChildrenInNeed

Someone please tell Mel Giedroyc to shut up. She is not the star tonight ( or any night really ) #ChildrenInNeed

Sorry but Mel Giedroyc is just so annoying#ChildrenInNeed

Mel really isn’t funny. Quite irritating. Not sure who is worse Mel or Tess. #ChildrenInNeed2019

And: “I do like Mel, but she’s making too much stuff funny when it’s a very serious show. Bring back Tess Daly I say!”

However, plenty of others took to Twitter to praise the former GBBO star, with one writing: “Mel Giedroyc is a hoot! Love her.”

While someone else wrote: “Mel Giedroyc is a national treasure and I will not be told otherwise!”

Mel Giedroyc is a hoot!

At one point in the evening, fellow presenter Graham Norton told Mel to stop using so many Bake Off puns.

Mel had said: “Guys that is a lot of dough. See what I’ve done there? Dough? Because they make bread. I’m on a roll now, these puns aren’t half-baked. The best thing since sliced bread.

Mel Giedroyc is a national treasure and I will not be told otherwise!

“You won’t get batter than these, they’re a piece of cake to do.”