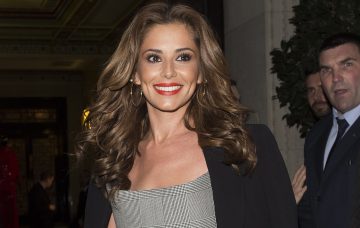 Cheryl and Liam Payne have spent a year hiding their baby away from the spotlight, but a week before Bear’s first birthday, a close pal has finally revealed what the mini A-lister looks like!

The producer is working on Cheryl’s comeback album, but has known the Girls Aloud star since 2011, when he worked on her single Craziest Things, featuring will.i.am.

He has also worked on music with Leona Lewis, JLS, Jennifer Hudson, Alesha Dixon and Tinie Tempah, among others.

Cheryl’s been reunited with Miranda Cooper, too, the writer behind many of Girls Aloud’s hits including Sound of the Underground, Love Machine and The Promise.

She’s also been spotted in the studio with JHus and X Factor winners RakSu.

Cheryl’s album is due to be released in the autumn which will coincide with the X Factor live shows returning to TV screens – where Cheryl’s rumoured to be returning as a judge.

In the new chat, Naughty Boy was also asked whether there are any songs about Cheryl’s One Direction boyfriend.

He said: “We are working on music but I didn’t say which relationships will be on the track though. It could be a mother and son relationship – like it could be about baby Bear.”

Read more: Cheryl reportedly switching record label for her new album as ‘it seemed the right time for a change’

Naughty Boy previously appeared on ITV’s Lorraine where presenter Lorraine Kelly asked if Cheryl was feeling the pressure for her comeback.

He said: “I feel she’s her own entity. Think of the success she’s had. I feel she’s in a good place and she can come back and people are waiting to hear what Cheryl’s going to do next.”

It follows news earlier this week that the mother-of-one has parted ways with Polydor, who were behind her previous four solo albums.

Polydor are part of the Universal Music Group, who Cheryl remains signed to, and it’s said she will now seek another of their labels to release her fifth album as “it seems the right time for a change.”

The Sun‘s source said: “There wasn’t anyone left at Polydor who worked with her in the past so it seemed the right time for a change.

“She is still contracted to Universal so now it’s a case of figuring out which label is the correct fit for the direction she is going in.”

Cheryl’s last album, Only Human, was released back in 2014.

Since then, she’s been focused on being a mum to Bear with boyfriend Liam, and opening her centre for young people in the North East with the help of the Prince’s Trust.

Are you excited to finally hear Cheryl’s music? Leave us a comment on our Facebook page @EntertainmentDailyFix and let us know what you think!