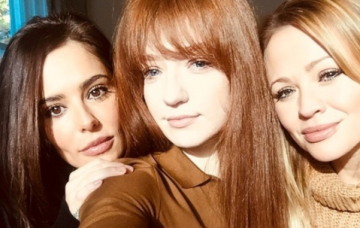 The Girls Aloud bandmates went out in honour of choreographer Beth Honan, who they became firm friends with after she taught them many of their dance routines over the years.

Nicola, 32, posted a picture on her Instagram account of the group sitting around a table with the birthday girl holding up a slice of cake with a candle in it.

“Bday dinner for Beth,” Nicola captioned the shot. She was pictured closest to the camera in a buttoned grey top with her red hair cut with a full fringe.

Mother-of-two Kimberley, 36, is sitting beside her in a black outfit, while Cheryl, 34, is seen on the opposite side of the table.

She has her long dark brown hair down and wears a low-cut burnt orange top with a drop necklace.

Their fans were delighted to see them back together.

“So nice seeing you all together,” wrote one. “Girls Aloud is alive,” said another.

Also joining them was fashion blogger Lily England, who has also been friends with the Girls Aloud stars for years.

The group went to the restaurant Mr Chow in swanky Knightsbridge, London.

Read more: Katie Price thanks surgeon for her “new face”

Nicola and Kimberley both shared videos on the Instagram stories of the chef creating their noodles in front of their eyes, beating and stringing out the dough.

“It looks like Nicola’s hair!” one of them exclaimed.

It was a rare night out for Cheryl, 34, who has kept a low profile since giving birth to baby Bear a year ago.

She did attend the Brit Awards with boyfriend Liam Payne, 24, in February though, putting on a united front following rumours they were to split.

The Fight For This Love has frequently spoken out on Twitter to deny their relationship is in trouble.

She’s also been busy this year launching her centre for young people in Newcastle with the support of the Prince’s Trust, and working on new music.

Kimberley, Nicola and Cheryl have remained the best of friends since they first met on Pop Stars: The Rivals back in 2002.

They became Girls Aloud along with Sarah Harding and Nadine Coyle, having a string of hit singles before embarking on separate career paths in 2013.

Kimberley told the Sunday Mirror the pop group could one day get back together.

“I wouldn’t rule it out, absolutely not. It may be something that will happen in the future – maybe for the 20th.

“If the planets collided and it was the right time, then definitely,” she said.

Would you like to see Girls Aloud get back together? Leave us a comment on our Facebook page @EntertainmentDailyFix and let us know what you think!