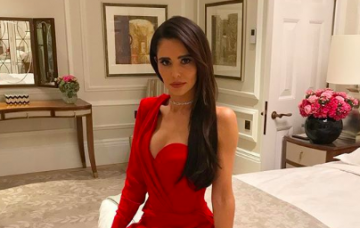 She really did not want to talk about it

Cheryl has been through a lot in the past 15 years – X Factor, malaria, two divorces, becoming a mum – but there’s one thing she’d REALLY rather forget.

In an uncomfortable new interview, the 35-year-old was asked about her violent conviction for assault, and hit back, calling it “irrelevant” and “boring”.

Back in October 2003, the then-Girls Aloud star was found guilty of assaulting a nightclub toilet attendant named Sophie Amogbokpa.

In the new chat with The Guardian, the journalist asked her about the case, where Cheryl was sentenced to 120 hours of community service and ordered to pay her victim £500.

Peter Robinson describes how “the temperature in the room seems to drop several degrees,” as Cheryl dismisses the incident as “irrelevant”, “not news,” and called the subject “boring,” adding: “I don’t understand why you’d even bring it up.”

Peter describes the back and forth conversation with Cheryl – who is mum to Bear, 20 months – writing: “Is she really surprised that people still mention it? ‘I don’t think they do!’ she replies. They do, I say. ‘Not really,’ she says. And so on.”

It’s the latest in a string of interviews the singer has given as she embraces her music comeback and promotes her new single Love Made Me Do It.

Until now, though, she’s mostly been asked about motherhood and the end of her two-year relationship to One Direction star Liam Payne.

She explained to The Sunday Times Style magazine how Liam, 25, initially “wanted to settle down and have a family and not do the solo thing. Then we encouraged him to to that. And then it didn’t work out.”

Cheryl – who also revealed that her ex wanted children from the age of 16 – was asked if Liam realised he didn’t want to start a family after all.

She replied: “You’ll have to ask him that.”

Do you think Cheryl’s assault charge is “irrelevant”? Leave us a comment on our Facebook page @EntertainmentDailyFix and let us know what you think.