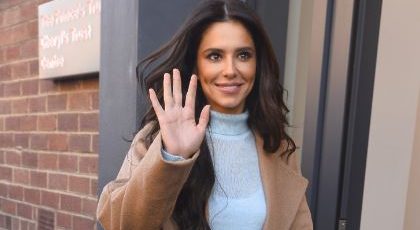 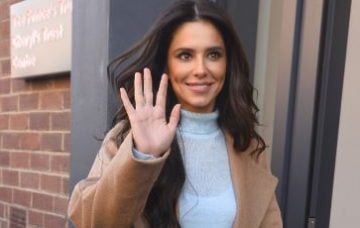 She rubbed shoulders with royalty at yesterday’s Prince’s Trust Awards but Cheryl’s fans were more impressed that she met a member of Hollywood’s elite.

The Fight For This Love singer shared pictures of herself posing with Dunkirk actor Tom Hardy at the event in London.

Wearing a white skirted dress with a stripey top half, the mother-of-one managed to bag not one, but two, pictures with the Peaky Blinders star.

Captioning the pictures, “great afternoon yesterday at the Prince’s Trust Awards”, Cheryl also posted pictures of her meeting Prince Charles as Olly Murs and Ant and Dec looked on.

The images quickly racked up thousands of likes, with many of her followers green with envy over her encounter with Tom.

A third commented: “Check you out with a cheeky pic with Tom Hardy,” while a fourth gushed: “Cheryl and Tom hardy in the same photo….. LIFE MADE.”

Another felt only writing in caps could fully express their sentiments as they typed: “SHUT THE FRONT DOOR A PICTURE WITH TOM HARDY ARE YOU KIDDING ME. So jel!”

While a further fan asked: “Is Tom Hardy as handsome in real life? There’s just something about him…” 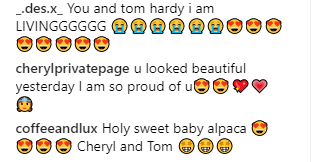 Cheryl and Tom are both celebrity ambassadors for the Prince’s Trust and attended yesterday’s awards ceremony to honour the achievements of young people supported by the charity.

Former Girls Aloud singer Cheryl, 34, has long been involved in their work, and last month she was delighted to open Cheryl’s Trust Centre in Newcastle with their support.

The centre will help unemployed young people in the region find work and offer training opportunities.

Prince Charles has known Cheryl for so long, he joked he’s found it hard to keep up with all her name changes.

She became a Cole when she was married to footballer Ashley and then took her second husband Jean-Bernard Fernandez-Versini’s name during their brief marriage.

Now she’s back to using her maiden name of Tweedy, but prefers just to be known as Cheryl.

The Prince quipped during the awards: “I thought to myself some time ago ‘who’s Cheryl Tweedy?’ I suddenly realised I knew the Cheryl bit but missed out on the Tweedy.

“But I’m enormously grateful to her for raising £1 million pounds. I can’t keep up with all the changes of names that the companies do either.”